‘The Bold and the Beautiful’ Spoilers: Eric Returns To Forrester Creations – Steffy Seduces Liam, Will He Cheat On Ivy? 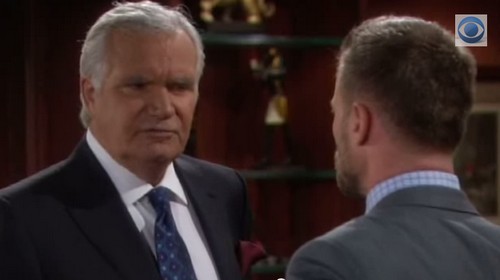 “The Bold and the Beautiful” spoilers for the Thursday February 19 episode of the CBS soap reveal another day of exciting drama at Forrester Creations. B&B coming and going news recently revealed that John McCook is returning as Eric Forrester, and according to the spoiler video for February 19 the patriarch is officially back in town, and he is not happy with the state his family company is in thanks to his warring sons Rick and Ridge.

Spoilers in the sneak peek video for Thursday’s episode of “Bold and the Beautiful” tease that fans can expect to see everyone at Forrester Creations itching with anticipation for Eric Forrester’s return. The spoiler video shows Rick warning Maya that he received a text message from his father and he is on his way home. Meanwhile, Ridge and Caroline contemplate how Eric will react to everything that Rick is done. Caroline announces to Ridge (Thorsten Kaye), “There is no way he is going to tolerate Rick’s behavior.”

The “Bold and the Beautiful” spoiler video for February 19 teases that Eric Forrester might be a little more understanding than anyone expected him to be. In the sneak peek Eric calmly asks Rick (Jacob Young), “Do you still have feelings for Caroline (Linsey Godfrey).” Rick replies, “Not any good ones.”

In other “Bold and the Beautiful” news, Ivy (Ashleigh Brewer) is concerned about Steffy sinking her claws in to Liam. The sneak peek video of Thursday’s episode of the CBS soap shows Ivy ranting to Liam about Steffy, “Considering the fact that she is still in love with you and she came back here to work things out between you two, that’s what she pretty much spelled out to me.” Ivy isn’t just being paranoid, she should definitely be worried because the spoiler video also shows Steffy (Jacqueline Macinnes Wood) in a bikini inviting Liam to go for a swim with her.

So B&B fans, how do you think Eric Forrester (John McCook) will react when he hears about what Rick has been up to? Will he support Rick, or take Ridge’s side? Do you think that Liam will give in to Steffy, or will he stay faithful to Ivy? Let us know what you think in the comments below and don’t forget to check CDL tomorrow for more “Bold and the Beautiful” spoilers and news.