The Bold and the Beautiful Spoilers: B&B Fans Turn Away from Maya & Rick – Transgender Story Fails to Redeem Rotten Characters 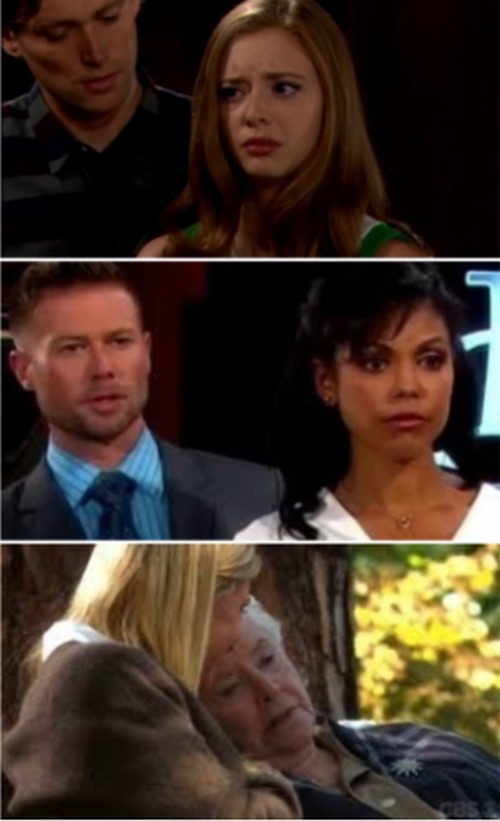 The Bold and the Beautiful spoilers expose the absurdity of Rick and Maya being painted as heroes solely because Maya is transgender – ignoring the fact that both of their B&B characters are vile disgusting human beings, impossible to warm up to or care about. On today’s The Bold and the Beautiful we saw the actual exchange of wedding vows between Maya (Karla Mosley) and Rick (Jacob Young). What was so interesting was that Rick made the exact same promises in the exact place to Caroline (Linsey Godfrey) and then proceeded to lie to her and cheat on her with the woman he was standing up there exchanging vows with. How is that for irony?

For all of the fans who have jumped on the Rick and Maya bandwagon all of a sudden I want to know what has made the two of them so worthy of forgiveness and redemption after all of the terrible things they have done? They haven’t really apologized or made amends to anyone and all they seem to focus on is themselves. They are still the same self-absorbed jerks they were when Rick was running FC and Maya hopped into bed with him before Caroline’s side of the bed was even cold. So what is it that makes Maya so wonderful now?

Being Transgender and having terrible parents does not make Maya a better person. Instead it merely shows how she acquired her duplicitous all about me nature. Why are people so quick to down Caroline when all she did was kiss Ridge (Thorston Kaye) until after the divorce papers were signed? The Rick and Maya pair lied, schemed, cheated, treated people like trash and abused everyone they came across – they couldn’t even postpone their wedding six weeks after the death of the young woman Aly (Ashlyn Pearson) whom they abused worse than anyone and who also happened to be Rick’s cousin.

What is so interesting is Brooke (Katherine Kelly Lang) was not a well-liked character for a time. Brooke made her fair share of mistakes in life. She had slept with other people’s husbands including her sister Katie’s (Heather Tom) but she worked hard to earn her redemption and the respect and forgiveness of her mother in law Stephanie, and Ridge Forrester (Thorsten Kaye) the man she loved by sincerely apologizing, turning her life around and doing her best to make amends and working to earn the forgiveness of those around her. Brooke took responsibility for her actions and by doing so earned back the love and respect of her family. She even earned the respect of the woman she had spent the last twenty years battling and they spent Stephanie’s last months together and Brooke held the matriarch’s hand as she passed away from cancer. Why not redeem Maya? Why are we suppose to fall in love with these two despicable people when they have done NOTHING to warrant forgiveness. We are suppose to feel sorry for Maya because she is a transgender? If Maya was not transgender people would still hate her because she has never redeemed herself and the same goes for spoiled self-righteous Ricky Boy.

Brad Bell and his team of writers started out writing this with two of the most hated characters on the show and had them do some despicable things to those around them – including having Rick use and embarrass Caroline to gain control of the company and then expose his affair thus dumping his wife – flaunting his mistress around the office, shooting off a gun and nearly killing Caroline and Ridge when they were in the office kissing. Rick forced Aly to rub his mistresses feet in order to get him to listen to ideas for Aly’s shoe line. There was also taking down the Matriarch of the Forrester family Stephanie (Susan Flannery) picture and replacing it with Maya’s which the ultimate sign of disrespect.

Now simply because Bell has decided to change Maya’s story and make her a Transgender woman whom Rick loves, fans are supposed to see them as better people? The writers could have and should have done a better job of making us believe it. First of all sincere and heartfelt apologies to everyone they hurt would have been a start. Instead Bell continued to have them snicker behind people’s backs and try to make fools of them. This is a huge part of the reason that Rick and Maya Forrester are still the most hated couple on TV and no matter what back-story you give them, Mr. Bell, that is not going to change.

Social media has had it with Rick and Maya being shoved down our throats – it is not about Transgender issues – it is about two horrible people who continue to be self absorbed and selfish. Bell expects us to fall in love with this couple just because Maya is transgender. An important question is why was this story more important than Aly’s mental illness story? If Bell wanted to make a difference he could have used Aly’s mental illness to help millions but instead he chose to kill her off in one of the most ridiculous death storylines on daytime.

A large percentage of Social Media does not call the show The Bold and the Beautiful anymore – they call it the Rick and Maya show and that is unfortunate because there are several great actors/actresses that could be utilized and be giving great performances.

What do you think CDL’ers do you like where The Bold and The Beautiful is going or would you rather see more of the other characters? Please leave your thoughts and comments in the CDL comments below.