‘The Bold and the Beautiful’ Spoilers: Ivy’s Shocking Secret, Does She Know Who Called Immigration, Was it Aly? 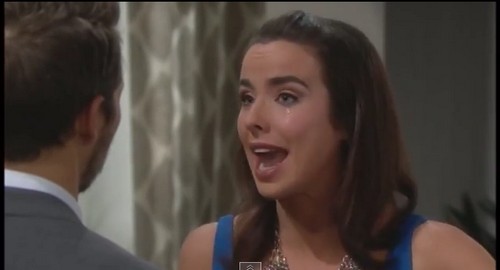 “The Bold and the Beautiful” spoilers tease that Ivy (Ashleigh Brewer) has a shocking secret that will have Liam’s (Scott Clifton) head spinning. The question is: what’s Ivy hiding? The obvious answer would be that Ivy called immigration services herself, but maybe it’s not that simple. We do know that Ivy will share her secret with Quinn (Rena Sofer), who will urge her to stay quiet about it. Crazy Quinn could have set all of this in motion to help Wyatt (Darin Brooks), but her hands seem clean so far. Nevertheless, Quinn has been trying desperately to keep Ivy and Liam’s marriage moving in the right direction, but Ivy’s revelation could throw it drastically off course.

If Ivy did turn herself in, she was betting a lot on Liam’s loyalty. It’s possible that Ivy was willing to take the risk, but it’s equally possible that someone else is responsible for summoning that immigration officer. Perhaps Ivy will learn who tipped him off and she’ll feel the need to fill Liam in. Steffy (Jacqueline MacInnes Wood) dropped a hint that she might have done the deed when she suddenly mentioned sending Ivy back to Australia. That statement may have been a subtle nod to what Steffy had done.

Another suspect would be the always ruthless “Dollar Bill” Spencer (Don Diamont). Bill has proven that he doesn’t care about what’s right or wrong. Just look at what happened with Maya (Karla Mosley). Bill published the story about Maya being transgender and he didn’t worry about who got hurt in the process. As a general rule, Bill gets what he wants by any means necessary. Bill has been pushing Liam toward Steffy and he might have thought getting rid of Ivy would be an extra nudge.

There’s also a wild card we have to consider. Aly (Ashlyn Pearce) has been acting pretty peculiar lately. B&B viewers know that Aly has always shown flashes of insanity. “The Bold and the Beautiful” rumors say that Aly is about to really go off the deep end in the coming months. Aly could’ve already started her descent into madness by turning Ivy in. When Steffy began throwing herself at Liam, Aly made it clear she should back off. Since Aly has decided to make Liam and Ivy’s relationship her latest pet project, perhaps she’s to blame for this whole mess. Maybe Aly knew Liam would marry Ivy if push came to shove.

Whatever the case, Ivy has a major secret to divulge and Liam probably won’t like what he hears. Ivy’s news will undoubtedly shake things up. Will Liam file for an annulment or continue to help his new bride? Stick with “The Bold and the Beautiful” to find out if Ivy’s updates will change Liam’s mind about his marriage.

So B&B fans, what do you think Ivy’s secret is? Do you believe Ivy called immigration services herself? Could Quinn or Steffy have done it? What about Bill or Aly? Let us know what you think in the comments below and don’t forget to check CDL tomorrow for the latest “Bold and the Beautiful” spoilers, rumors, updates and news.

Watch The Bold and the Beautiful video spoilers and promo for the June 19, 2015 episode