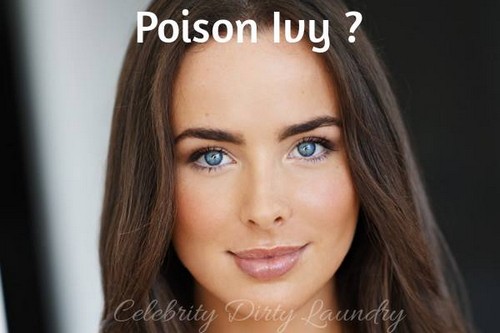 The Bold and the Beautiful spoilers explore the possibility that Ivy is really Poison Ivy and is playing devious B&B games behind the scenes that impact several characters. Here come the crazies! Bold and the Beautiful has arguably the smallest cast of all the soaps yet is holding their own in the off balanced women department these days. B&B’s Quinn Fuller [Rena Sofer] and Alexandria Forrester “Aly” [Ashlyn Pearce] have proven to be unstable and I plan on adding another nut to the batch… Ivy Forrester [Ashleigh Brewer]. Ivy dropped into town last year during the Liam/Hope/Wyatt triangle [Scott Clifton] [Kim Matula] [Darin Brooks]. Ivy has had her eyes set on Liam Spencer from the get go.

Ivy seems to play the victim well without giving off a diabolical sneaky vibe like her adversary Quinn. Ivy Forrester plays the wholesome “Sandra Dee” card to a tee – case in point: while Hope, Liam, Wyatt and Ivy were in Paris, Ivy and Liam were watching Hope on a bridge from a distance when out of the blue Quinn rides by on her trusty moped like hell on wheels driving over the bridge pushing Ivy in to the shallow water. Liam yells he wants to save her and she tries to act like the martyr – “No go to Hope don’t worry about me.” Ivy knew he would not leave her in the water, thus ruining his relationship with Hope permanently.

Ivy takes advantage of every circumstance full throttle and is always on her game Not many really see through her yet and the Australian accent seems to get stronger during times when she wants her way, which softens her character and makes her seem harmless. Ivy has NEVER had a problem standing up to Hope Logan calling her and her mother Brooke [Kelly Katherine Lang] out on their musical men chairs. Ivy stood up to Rick Forrester [Jacob Young] at the peak of his rotteness. Ivy has even threatened maneater Steffy Forrester [Jacqueline MacInnes Wood] who has proven to be a force to be reckoned with. All leads us to ask the question WHO IS IVY FORRESTER REALLY?

Ivy got a letter from immigration telling her she will be deported within a week unless she is a legal citizen. Who made that call? People speculate Steffy, Bill or Quinn but the most obvious is usually not the culprit on soaps. In this case the less obvious will probably end up being the perpetrator and who would be less obvious than Ivy herself and even setting it up to look like Steffy did it!!! Ivy is so desperate to keep Liam she had this whole plan in motion but the one thing she did not plan on was her new ally Quinn Fuller. Quinn has done everything to keep Ivy and Liam together so that Liam will stay out of Wyatt’s love life for good. Ivy has now basically made a deal with the devil, Quinn, to keep Liam.

Ivy Forrester could very easily turn out to be “Poison Ivy.” If Steffy Forrester thinks Ivy is some meek little bug she can squash she better think again. Ivy has already started her plan to keep her man Liam Spencer and heaven help whoever gets in her way. How far will Ivy go to keep Liam? Ivy was eavesdropping on Liam and Steffy reminiscing about good times and how much in love they were and still are, Ivy continued to listen while Liam told Steffy he will have a talk with Ivy. Ivy looked hurt BUT it will not stop her from basically forcing Liam to a shotgun wedding whether he loves her or not.

Ivy shows signs of a devious desperate woman and I also wouldn’t put it past her to get pregnant or fake a pregnancy considering Liam and Steffy lost their unborn child. Does Ivy hate Steffy more than she loves Liam? I would venture to say it’s a tie at this point! Ivy has been obsessed with “owning ” Liam since the Hope days. Ivy has crazy jealousy written all over her face when it comes to Liam, she will continue to bat her beautiful big eyes to Liam and continue to be a force behind closed doors when she deals with her nemesis.

Keep your eyes peeled for the crazy side of Ivy to start surfacing more and more on CBS’s The Bold and The Beautiful. What do you think CDL’ers, do you think Ivy called immigration on herself? Will she set Steffy up – driving a wedge between Liam and Steffy? Stay tuned and come back to CDL for more The Bold and the Beautiful spoilers and rumors every day! We love to hear your thoughts please leave your comments in the CDL comments below.