‘The Bold and the Beautiful’ Spoilers: Quinn Aids Ivy So Wyatt Gets a Clear Run at Steffy – Liam Shocked by Steffy and Wyatt’s Kiss 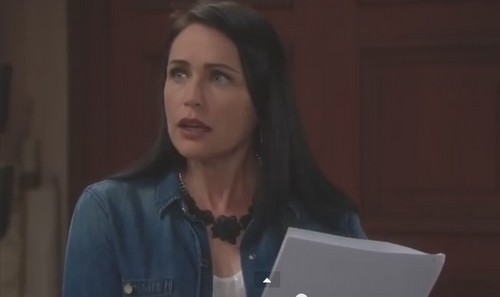 “The Bold and the Beautiful” spoilers for Wednesday, June 10, tease that Wyatt (Darin Brooks) will let Quinn (Rena Sofer) know that he’s interested in Steffy (Jacqueline MacInnes Wood). Naturally, Quinn will take the idea and run with it. As Quinn starts gushing about the potential of his new romance, Wyatt will urge her to calm down and remember that it’s not a done deal yet. No one’s in love here and they barely know each other. However, there is some chemistry between the pair and Quinn will have a good feeling about where this could lead.

Meanwhile, Liam (Scott Clifton) will be shocked to learn that Steffy shared a kiss with Wyatt. It is a little surprising since Steffy planted one on Liam and almost immediately locked lips with his brother. Liam doesn’t really have a right to be upset that Steffy is moving on. Liam made it clear that Ivy (Ashleigh Brewer) is his choice, which means Steffy should be free to play the field. On the other hand, there’s surely some sort of “bro code” Wyatt is breaking. Of course, Liam and Wyatt obviously don’t uphold any brotherly rule in the romance department. We’ve already seen this same scenario play out with Hope (Kim Matula). It seems Liam and Wyatt’s similar taste in women causes them a world of trouble.

Nevertheless, Wyatt will press on and try to score some summer fun with Steffy. “The Bold and the Beautiful” spoilers say Wyatt will remind Steffy that Liam is secure in his relationship and Ivy isn’t going anywhere. Unfortunately for Ivy, there could be a change of plans. Ivy will inform Quinn that she may be deported if she can’t get her immigration problems sorted out. Quinn knows that Liam could find himself turning back to Steffy if Ivy is out of the picture. As a result, Quinn will agree to help Ivy out so Wyatt can have a shot at getting the girl he wants. B&B rumors hint that Liam will propose to Ivy to keep her in the country. Will Liam really go through with the marriage or will he get cold feet? Stick with “The Bold and the Beautiful” to see if Liam and Ivy will soon make some updates to their relationship.

So B&B fans, what do you think about the news that Quinn will try to help Ivy and Wyatt at the same time? Is this a disaster waiting to happen? What about Liam’s view on Steffy and Wyatt getting together? Should Liam’s opinion count? Let us know what you think in the comments below and don’t forget to check CDL tomorrow for the latest “Bold and the Beautiful” spoilers, rumors, updates and news.

Rnjoy The Bold and the Beautiful video promo for June 10, 2015 below!