The Bold and the Beautiful Spoilers: Wyatt Confronts Liam For Wanting Both Ivy and Steffy, Ivy Tells Liam She’s Being Deported

BY Heather Hughes on June 12, 2015 | Comments: one comment
Related : Soap Opera, Spoiler, Television, The Bold and the Beautiful 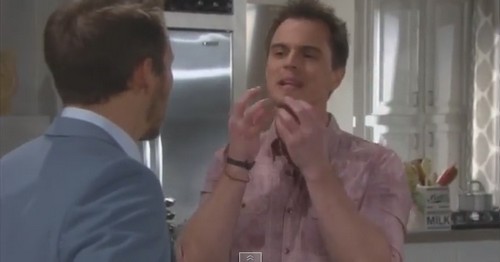 “The Bold and the Beautiful” spoilers for Friday, June 12, tease that Ivy (Ashleigh Brewer) will drop a huge bomb on Liam (Scott Clifton). In fact, it appears both Liam and Ivy will have big news. B&B viewers know that Liam plans to tell Ivy about his chat with Steffy (Jacqueline MacInnes Wood). Liam may not completely understand what he’s feeling, but it’s clear Steffy holds a special place in his heart. However, Liam’s revelation will likely be put on the backburner when Ivy blurts out that she’s being deported. Liam will be stunned to learn that Ivy may have to leave the country. It sounds like Liam could change his mind once again. When it comes to being indecisive, Liam has apparently become a replacement for Hope (Kim Matula).

Wyatt (Darin Brooks) will step up and confront “Mr. Wishy Washy” about his recent behavior. “The Bold and the Beautiful” spoilers say Wyatt will accuse Liam of being like a golden retriever with too many tennis balls in his mouth. Liam has two women who love him, but he can’t seem to make up his mind about which one he loves back. Perhaps the problem is Liam loves them both. The rumors say Liam may ask Ivy to marry him so she can stay in the United States. Will Liam really be willing to set aside his love for Steffy and fully commit to Ivy? Stick with “The Bold and the Beautiful” to find out what Liam’s decision will be.

Other B&B spoilers reveal that Steffy will be angry that she’s been bargained for like a used car. Bill (Don Diamont) has been insisting that Liam belongs with Steffy. Wyatt is trying to push Liam toward Ivy so he can have Steffy for himself. Even crazy Quinn (Rena Sofer) has started to get in on the action by meddling on Wyatt’s behalf. It seems everyone is just a little too involved in Liam and Ivy’s relationship. Ultimately, Ivy’s future lies in Liam’s hands. Stay tuned to the CBS soap to see if Liam will ignore the pressure and follow his heart.

So B&B fans, what do you think about Ivy’s shocking updates for Liam? Will Liam marry Ivy to solve her immigration issues? Is Wyatt right that Liam is trying to juggle too many women? Who will Liam choose? Let us know what you think in the comments below and don’t forget to check CDL tomorrow for the latest “Bold and the Beautiful” spoilers, rumors, updates and news.

Watch The Bold and the Beautiful video promo for Friday June 12, 2015