‘The Bold and the Beautiful’ Spoilers: Ivy Eavesdrops, Worries Liam Chooses Steffy – Quinn Urges Ivy to Fight for Her Man 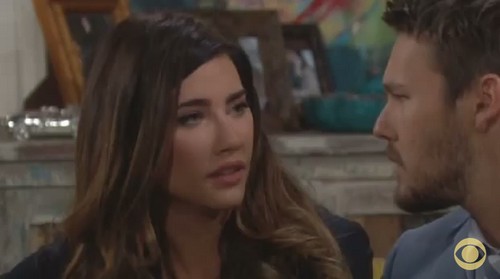 “The Bold and the Beautiful” spoilers for Thursday, June 11, tease that Steffy (Jacqueline MacInnes Wood) will try to get Liam (Scott Clifton) to understand her point of view. Steffy has made it perfectly clear that she wants to get back together with Liam, but his commitment to Ivy (Ashleigh Brewer) is standing in the way. However, that won’t stop Steffy from trying to win him over. Steffy will urge Liam to remember what they had and how special it was to both of them. It seems Steffy feels they can recapture that magic if Liam will just open his heart. Liam will listen as Steffy encourages him to accept her and finish what they started.

Liam will probably shoot Steffy down in the nicest way possible. After all, Liam still loves Steffy and he might be willing to give things another shot under different circumstances. “The Bold and the Beautiful” spoilers reveal that Ivy will eavesdrop on Steffy’s conversation with Liam and it’ll lead to some confusion. It sounds like Ivy will once again overhear the pair talking about how much they still care about each other.

Steffy’s seduction and Ivy’s insecurity are constantly creating problems for Liam. Fortunately, a stunning development could put all the recent issues to rest. “The Bold and the Beautiful” spoilers indicate that Quinn (Rena Sofer) will say Ivy needs to fight for her man. Quinn wants Wyatt (Darin Brooks) to have an opportunity to woo Steffy and officially taking Liam off the market is the perfect way to make that happen. B&B rumors say that Liam will offer to marry Ivy so she can stay by his side. However, Steffy will undoubtedly fight this marriage until the rings are exchanged and Liam finally says “I do.” Will Steffy ruin Ivy’s dream of a future with Liam? Stay tuned to the CBS soap to see if Steffy has any tricks up her sleeve.

So B&B fans, what do you think about the news that Steffy will plead with Liam to pick up where they left off? Should Steffy just give it up already? What about Ivy’s lack of trust? Will Liam prove he’s committed to Ivy by marrying her or will Steffy force him to make some updates to his plan? Let us know what you think in the comments below and don’t forget to check CDL tomorrow for the latest “Bold and the Beautiful” spoilers, rumors, updates and news.