‘The Bold and the Beautiful’ Spoilers: Forrester Mutiny In The Works – Caroline Plots Maya’s Overthrow? 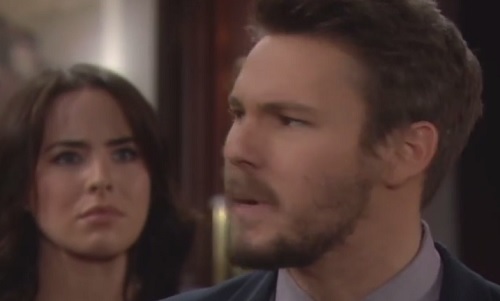 In other “Bold and the Beautiful” news, it seems like Rick Forrester has ruffled one too many feathers at Forrester Creations. According to B&B spoilers on January 21st fans can expect to see Liam continue to curse out Rick. In the spoiler video, Liam rants, “You don’t get to be a bully just because you are hurt or just because you can.”

It looks like there may be a mutiny at Forrester Creations soon though, Caroline appears to be discussing Rick’s authority with someone else and in the spoiler video for Wednesday’s episode she explains, “Rick is the boss, there is not much we can do about it.” But rumor has it that Caroline and the rest of the disgruntled crew at Forrester Creations will begin plotting to overthrow her soon-to-be ex and his mistress Maya very soon.

The “Bold and the Beautiful” spoiler video for Wednesday’s episode of the CBS soap also teases that fans can expect to see a sweet moment between Bill Spencer and his off-again on-again wife Katie. In the sneak peek Katie flirts with Bill and teases, “Bill Spencer lives and learns, who would have thought?”

So, B&B fans, do you believe that Liam is truly in love with Ivy, or is she just a rebound to help him get his mind off from Hope Logan? Will Steffy Forrester come between them? How much longer will Rick Forrester be in control of the family business, before the Forrester Family joins forces and dethrones him? Let us know what you think in the comments below and don’t forget to check CDL tomorrow for more “Bold and the Beautiful” spoilers and news.