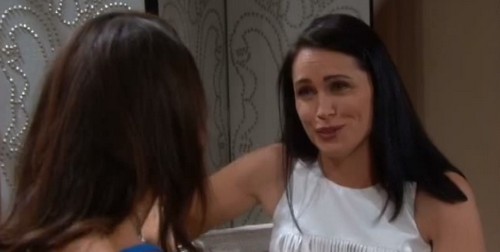 “The Bold and the Beautiful” spoilers for Wednesday, June 17, tease that Quinn (Rena Sofer) will push Wyatt (Darin Brooks) to get ready to charm Steffy (Jacqueline MacInnes Wood). Now that Liam (Scott Clifton) and Ivy (Ashleigh Brewer) are married, Quinn is sure that Steffy’s going to come knocking on Wyatt’s door. However, another B&B character won’t be as encouraging.

Ridge (Thorsten Kaye) will try to convince Wyatt to back off Steffy and find someone else to pursue. Steffy recently opened up to Ridge about her feelings for Liam and he’ll make it clear that there’s no point in Wyatt even trying to win her over. Of course, Ridge and Wyatt have no idea that Liam has just tied the knot with Ivy. Once the news gets out, it’s going to cause quite a stir.

Before Liam drops the bomb, Steffy will plan the perfect night at home and hope she can make Liam remember how much he cares about her. Steffy feels confident she’s about to claim her prize, but she’s sadly mistaken. “The Bold and the Beautiful” spoilers say Liam will tell Steffy he just married Ivy. At first, Steffy won’t believe what she’s hearing. Steffy thought Liam was going to break things off with Ivy. Instead, Liam spent the evening getting hitched.

Steffy will be heartbroken when she gets updates on Liam’s actions. Some B&B rumors hint that Steffy may have been the one who called the immigration department on Ivy. If those rumors are true, Steffy’s scheme has backfired in a big way. Steffy was hoping that Ivy would be sent back to Australia, but Ivy’s marriage to Liam means she’ll be sticking around. Stay tuned to “The Bold and the Beautiful” to see if Steffy will come to grips with Liam’s decision or fight for her old flame.

So B&B fans, what do you think about Ridge and Quinn’s opposing opinions on Wyatt’s pursuit of Steffy? Is going after Steffy in Wyatt’s best interest? What about Liam’s big news? Will Steffy be able to move past this devastating loss or will she cling to hope of love with Liam? Let us know what you think in the comments below and don’t forget to check CDL tomorrow for the latest “Bold and the Beautiful” spoilers, rumors, updates and news.