‘The Bold and the Beautiful’ Spoilers: Steffy Opens Up to Ridge, Wants Another Chance with Liam – Quinn Reassures Wyatt

BY Heather Hughes on June 16, 2015 | Comments: 2 comments
Related : Soap Opera, Television, The Bold and the Beautiful 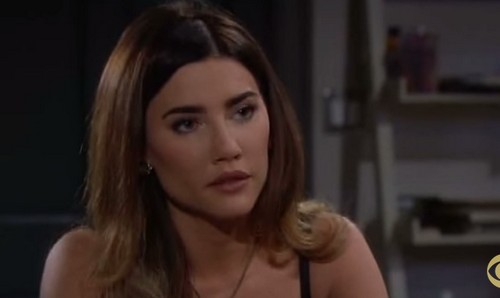 “The Bold and the Beautiful” spoilers for Tuesday, June 16, tease that Steffy (Jacqueline MacInnes Wood) will open up to Ridge (Thorsten Kaye) about her feelings for Liam (Scott Clifton). Steffy has definitely made some mistakes in the past, but she’s hoping she can win Liam over. Unfortunately, Liam is busy making a mistake of his own. As Liam and Ivy (Ashleigh Brewer) get hitched, Steffy will try to get her love life back on track.

B&B spoilers hint that Steffy will hope she has a chance to make things right with Liam. Steffy will say that if she’d handled things differently, she really believes she’d be married to Liam right now. Whether that’s true or not, Steffy will soon find out she’s missed her window of opportunity. When Liam gives Steffy updates on his current marriage, she’ll be livid that he would take such a huge leap without telling her. However, Steffy probably shouldn’t get too worked up. The rumors say Steffy might get her chance after all. “The Bold and the Beautiful” viewers know that Liam has a tendency to waffle on his women.

Liam and Ivy decided their union would simply serve as a business agreement. This marriage is basically a piece of paper, but it’s a valuable one for Ivy. Once Ivy’s immigration issues are sorted out, there’s no guarantee that Liam will stay committed to her. Still, Liam appears to be sticking with Ivy for now and that means Steffy may look elsewhere for love while she waits.

Fortunately, Steffy has another guy to fall back on. Wyatt (Darin Brooks) has already been trying to convince Steffy to move on and Liam’s marriage to Ivy will only bolster his argument. When Wyatt learned Quinn (Rena Sofer) had orchestrated this grand plan to unite Ivy and Liam, he seemed pretty pleased. Nevertheless, Wyatt may become concerned when he hears a little more about Quinn’s scheme. Quinn will assure Wyatt that her plot will work, but we all know there are plenty of ways it could go wrong. That’s especially true with Quinn as the mastermind. Stick with “The Bold and the Beautiful” to see if it will Quinn will get the outcome she’s looking for.

So B&B fans, what do you think about the news that Steffy will want to win back Liam? Is there any hope for that now that Liam is married to Ivy? Should Wyatt worry about Quinn’s involvement in all of this? Will Quinn’s brilliant plan turn into a total disaster? Let us know what you think in the comments below and don’t forget to check CDL tomorrow for the latest “Bold and the Beautiful” spoilers, rumors, updates and news.

Watch The Bold and the Beautiful video promo for June 16, 2015 below