‘The Bold and the Beautiful’ Spoilers June 18: Quinn Encourages Ivy – Wyatt Confesses to Bill – Steffy Beats Up On Liam 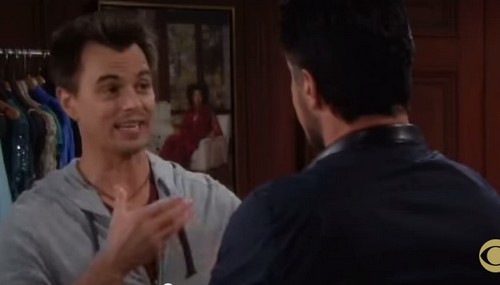 “The Bold and the Beautiful” spoilers for Thursday, June 18, tease that Ivy (Ashleigh Brewer) could start to take her marriage more seriously thanks to some gentle nudging from Quinn (Rena Sofer). B&B viewers know that Quinn is determined to pair Wyatt (Darin Brooks) with Steffy (Jacqueline MacInnes Wood) and keeping Liam (Scott Clifton) unavailable could help her achieve that goal. Quinn will say that it’s OK for Ivy to admit she wants things to work out with her husband. If everything goes well, Liam could decide that he wants to stay married to Ivy after her immigration issues are resolved. Quinn is certainly counting on Liam growing closer to Ivy and drifting further from Steffy.

Meanwhile, Wyatt will give Bill (Don Diamont) updates on his interest in Steffy. Bill has made it clear that he believes Steffy belongs with Liam and he probably won’t be pleased with Wyatt’s intentions. Nevertheless, it seems Wyatt is about to ramp up his efforts and make sure Steffy knows what he brings to the table. At this point, Wyatt only has a mild crush, but things are moving along fairly quickly. Plus, a little piece of Wyatt would likely enjoy winning Steffy’s heart just so he can one-up Liam. The rumors say their brotherly rivalry will remain an ongoing battle. Stay tuned to “The Bold and the Beautiful” to see if Steffy will soon turn her attention to Wyatt.

Other “Bold and the Beautiful” spoilers reveal that Steffy will lash out at Liam for his sudden decision to marry Ivy. Liam obviously had a tough time saying his vows, but he cares too much about Ivy to allow her to be sent back to Australia. Marriage was the only logical solution to Ivy’s problem. Liam will try to convince Steffy that he had to do the right thing and it’s really just for show. However, you can bet that Steffy won’t approve of his gallant gesture. Steffy wants Liam all to herself and now Ivy has become even more of a hurdle. Stick with the CBS soap to see if Steffy will find a way to get Ivy out of the picture.

So B&B fans, what do you think about the news that Quinn will encourage Ivy to treat this marriage just like a real one? Will Liam begin to see it that way with time? Will Steffy ultimately give up on Liam and move forward with Wyatt? Let us know what you think in the comments below and don’t forget to check CDL tomorrow for the latest “Bold and the Beautiful” spoilers, rumors, updates and news.