‘The Bold and the Beautiful’ Spoilers: Caroline Confesses To Liam – Rick Fights With Aly and Ivy Over Stephanie’s Painting! 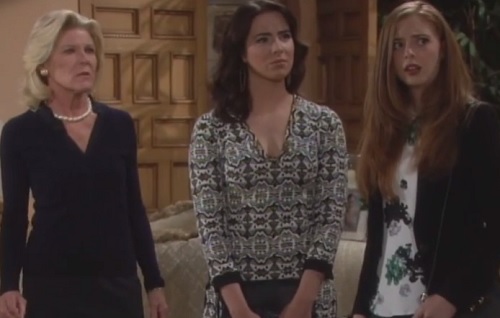 The “Bold and the Beautiful spoilers” (B&B) for the episode of the CBS soap airing on Thursday, January 8 tease another day of drama at the Forrester Mansion. Rick Forrester has reached a new level of arrogance, and someone needs to reign him in before he goes too far. “Bold and the Beautiful” spoilers teased that this week Rick would make some major changed at the Forrester Mansion to make himself “more comfortable” and, judging from the spoiler video for Thursday’s episode, his changes involved matriarch Stephanie Forrester’s symbolic painting.

Thursday’s sneak peek video show a shocked Pam, Ivy, and Aly standing in the Forrester’s living room near the wall where Stephanie Forrester’s painting used to hang. Pam confronts Rick: “You knew that this picture was up on the wall?” Rick smiles smugly and responds, “Yeah, I put it there.” In the promo video we don’t actually see the painting so we have no idea what Rick actually did, but considering how cocky he has been lately we wouldn’t even be surprised if he took down beloved Stephanie’s picture and put up a photo of himself. Afterwards he informs Maya, “Frankly, I don’t give a damn who disapproves.”

In other B&B news, spoilers tease that Caroline moves in with her cousin Liam – and the two spend January 8 chatting about their complicated love lives. In the spoiler video for tomorrow’s episode of the CBS soap Caroline gushes, “There was just this electricity between us.” Unfortunately, we have no idea if she is referring to Ridge or Rick. Liam seems to sympathize with his cousin in the sneak peek though and understands why she kissed Ridge. Liam agrees, “You know that you are jeopardizing the most important thing in your life and somehow you don’t stop until it is done.”

So B&B fans, what do you think Rick did to Stephanie’s picture? How much longer is this going to go on before someone finally puts him in his place? Now that Caroline has moved out – do you think she will hook up with Ridge again? Let us know what you think in the comments below and don’t forget to check CDL tomorrow for more “Bold and the Beautiful” spoilers and news.