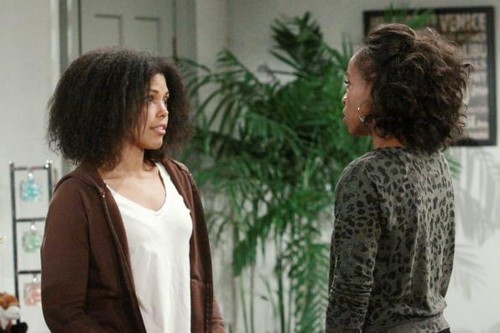 “The Bold and the Beautiful” spoilers told us Maya (Karla Mosley) had a secret and boy, was it a doozy! Nicole (Reign Edwards) let us all know that Maya was once her brother, Myron. People just can’t stop talking about the big reveal. In all honesty, that’s probably the point. If B&B writers wanted to send shock waves through social media, they certainly did it. However, once the initial buzz wears off, we’re left to wonder: where do they go from here? By tackling a transgender storyline, they’ve put themselves in a very tricky situation. “The Bold and the Beautiful” writers will have to tread carefully if they hope to pull this off without alienating viewers.

First, you have the issue of older or more conservative soap fans. We’re talking about the pearl-clutching, don’t-bother-me-while-my-stories-are-on kind of ladies who have been with B&B from the start. While some of them may be fine with watching a transgender storyline unfold, others may not be as open to the idea. That doesn’t mean “The Bold and the Beautiful” writers shouldn’t attempt it, but it does mean they run the risk of losing a large portion of the audience that keeps them afloat. After all, we know soap ratings aren’t what they used to be. If viewers jump ship, then advertisers probably will as well. That money is crucial to keep the CBS daytime drama alive.

Next, you have the LGBT community. While some have been excited that “The Bold and the Beautiful” has decided to move forward with a transgender character, quite a few have expressed outrage that Karla Mosley is not actually a transgender woman. If the story’s going to be done, they want it done right. Plus, there’s the problem of how characters are going to react when the truth comes out. At this point, it’s anyone’s guess how Caroline (Linsey Godfrey), Ridge (Thorsten Kaye) and the rest will respond. Still, Bradley Bell, the executive producer and head writer for B&B, says that this is a story of “love and tolerance.” That’s undoubtedly why Rick (Jacob Young) keeps repeating his honesty mantra. It seems likely that Rick’s anger will be directed at Maya’s lies rather than her past as Myron.

Finally, there’s what might be the biggest hurdle “The Bold and the Beautiful” is facing now: a character’s history is being rewritten. Any longtime soap fan will tell you that there’s nothing more irritating than writers thinking they can just change the past whenever they please. Soap viewers invest a lot of time and energy into following along every day. When they introduced Maya, we soon learned she had a daughter she gave up for adoption before entering prison. We heard all about how Bill (Don Diamont) dug deep into Maya’s background to uncover her pregnancy and crimes. There was no mention of Myron or a sex change. Bradley Bell said that there will be an explanation, but it’s going to be a tough sell. It seems many soap watchers feel like their intelligence is being insulted when writers try to say something happened differently than it did on screen. B&B viewers will likely accept the updates eventually, but the point is they’re going to be highly annoyed.

Bottom line, “The Bold and the Beautiful” has taken a step that’s—well, bold. It’s too soon to say whether it was the right business move, but at least they’ve put the drama back in daytime. Whether you agree or disagree with the transgender storyline, the rumors say it’s going to make for some interesting scenes in the coming weeks. When it comes down to it, sometimes people just want to be entertained.

So B&B fans, what do you think about the news that “The Bold and the Beautiful” is doing a transgender storyline? Do you agree with the decision? Even if you disagree, are you still curious how the other characters will react when they learn Maya’s secret? Let us know what you think in the comments below and don’t forget to check CDL tomorrow for the latest “Bold and the Beautiful” spoilers, rumors, updates and news.