The Bold and the Beautiful Spoilers: Will Caroline Have Thomas’ Baby – Go To War With Ridge and Steffy? 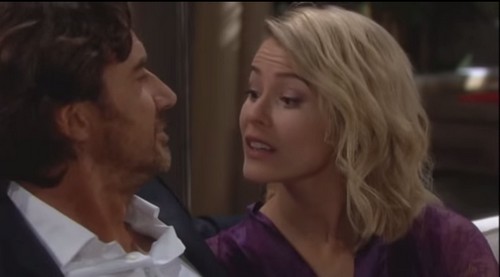 The Bold and the Beautiful Spoilers is shedding more light by giving new details on Caroline Spencer [Linsey Godfrey] and her dream of being a B&B mother to children of her own. A few months after Caroline was hit by a car, she had a deep revelation about her own destiny and what was really important in life. She recently discussed her desires of being a mom to her much older boyfriend Ridge Forrester [Thorsten Kaye]. Ridge told her point blank, “I’ve been there, done that and I’m not going there again!” Caroline put a brave face on, but secretly sobbed when she realized Ridge wasn’t going to budge on his decision.

According to the latest Bold and the Beautiful rumors, Caroline decides it’s more important to her than ever to have her own baby. She finally gets to fulfill her dreams by becoming pregnant, by not her boyfriend, but by his son Thomas Forrester [Pierson Fode]! Since Thomas returned to Los Angeles and Forrester Creations, Thomas has been fixated on his father’s young new girlfriend. Thomas knows he can give Caroline what she truly desires, a family of her own.

More shocking B&B teasers report a huge feud erupting between father and son, Ridge and Thomas. When Ridge learns Caroline is carrying a child with his son, all Hell breaks out and leaves the CEO of Forrester Creations in total disarray. There is no way Ridge wants to raise his potential grandchild after both Caroline and Thomas, hurt him deeply by sleeping together.

Now that the design trio has been ripped apart, additional Bold and the Beautiful Spoilers are releasing more rumors of Thomas taking full control of the design team and declaring himself head designer at FC. What’s this mean to the Future of Forrester Creations? Now Caroline finds herself at the center of controversy in the Forrester family. Thomas’s loyal sister Steffy [Jacqueline MacInnes Wood] insist that Caroline and her child will never become part of her family after tearing Ridge and Thomas apart. What does this mean for Caroline and her baby’s future? Don’t miss a single moment of how this storyline unfolds and it’s effect on the lives of the many characters involved. On our Soap Opera Spy Facebook page you will find daily updates. You can also catch the latest news and spoilers on CDL.