‘The Bold and the Beautiful’ Spoilers: Liam Demands Steffy Explain Role In Aly’s Death – Wyatt Pushes Ivy to Use Video 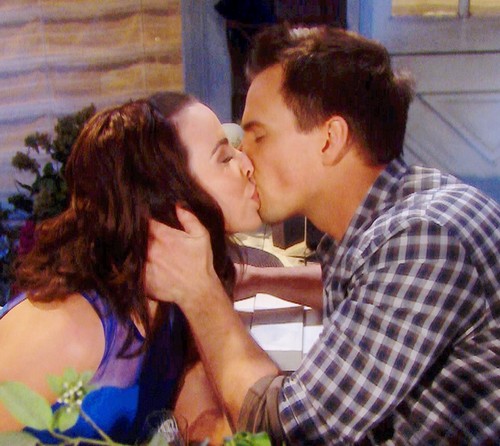 “The Bold and the Beautiful” spoilers reveal that Aly (Ashlyn Pearce) may be gone, but she certainly isn’t forgotten. Steffy (Jacqueline MacInnes Wood) was probably hoping that the suspicion would die down after Aly’s funeral, but it looks like the police will have some lingering questions. You can bet that Steffy will be unnerved, but she won’t crack under the pressure. B&B spoilers say Steffy will stick to the script and maintain that this was purely a freak accident.

Unfortunately for Steffy, Ivy (Ashleigh Brewer) doesn’t intend to let her get off scot-free. Steffy struck Aly in self-defense, but Ivy’s video tells a different story. In a conversation with Liam (Scott Clifton), Ivy will start hinting around that Steffy hasn’t been honest about what happened that night. “The Bold and the Beautiful” spoilers tease that Liam’s skepticism will increase and he’ll feel the need to confront Steffy about what she’s hiding. Steffy will deny any wrongdoing and act hurt that Liam would doubt her. Nevertheless, Liam will likely realize that something just doesn’t add up.

Meanwhile, Ivy and Wyatt (Darin Brooks) will become a scheme team. These two have really bonded since Steffy turned down Wyatt and Liam dumped Ivy. It seems their misfortune may have been beneficial after all. Wyatt and Ivy will grow closer in the coming weeks. In fact, Wyatt will introduce Ivy to the fine art of scheming. With Quinn (Rena Sofer) as a mom, Wyatt’s learned from the best. Wyatt may point out that Steffy stole Ivy’s man and killed her cousin. As Aly once said, “It’s always take, take, take.” Now it’s Ivy’s chance to get something in return.

Forrester Creations is heading in an exciting direction and they’ll need a fresh face to lead the charge. “The Bold and the Beautiful” spoilers say Wyatt will urge Ivy to snatch the modeling position for herself. Ivy will be hesitant to go along with the idea, but Wyatt will assure her that she has what it takes to be FC’s latest model. At times, Ivy was a rather bland character when she was with Liam. Apparently, Ivy just needed a little spicing up from Wyatt. The rumors indicate that we’ll see a whole new side of Ivy thanks to Wyatt’s influence. Stay tuned to the CBS soap to find out what the future holds for this good girl gone bad.

So B&B fans, what do you think about the news that the police will have more questions for Steffy? Will Liam believe Steffy is telling the truth? Will Steffy ever admit what truly happened or will everyone have to get updates through the video? How do you feel about Wyatt and Ivy getting sneaky? Let us know what you think in the comments below and don’t forget to check CDL tomorrow for the latest “Bold and the Beautiful” spoilers, rumors, updates and news.