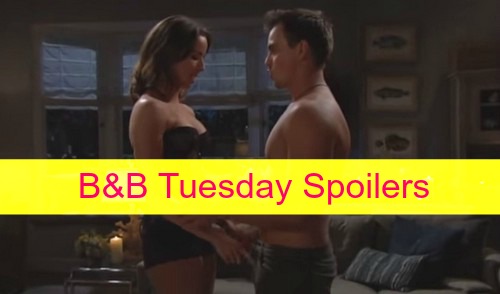 “The Bold and the Beautiful” spoilers for Tuesday, October 13, tease that Maya (Karla Mosley) will fear she requested too much from her little sis. Rick (Jacob Young) and Maya recently asked Nicole (Reign Edwards) to serve as their surrogate, but now they’re not so sure it was the right move. When Rick brought up Zende’s (Rome Flynn) potential reaction, Maya grew concerned about putting pressure on Nicole. After all, Nicole has just entered into a new relationship with Zende and it could put their future in jeopardy. Maya will feel like it’s unfair to ask Nicole to make such a huge sacrifice.

However, the shock will start to wear off for Nicole and she’ll see what this would really mean to Maya. Nicole will tell Maya she’s grateful to have the chance to repay her for everything she’s done. It certainly looks like Nicole might give surrogacy a shot. On Wednesday’s episode, Zende will realize that his plans for their romance aren’t in line with Nicole’s. These two will definitely have some issues to sort out in the coming weeks if Nicole acts as a surrogate.

Meanwhile, Wyatt (Darin Brooks) and Ivy (Ashleigh Brewer) could encounter a problem of their own. Thanks to Wyatt, Ivy is feeling slightly more confident about her new position as a lingerie model. Wyatt and Ivy appear to be a great match, but Liam (Scott Clifton) could be an obstacle. It seems Ivy will say something that raises Wyatt’s doubts about her commitment to him.

“The Bold and the Beautiful” spoilers say Wyatt will wonder if Ivy still has feelings for her ex. Ivy will probably deny it, but there could be some truth to the idea. Nevertheless, it would be in Ivy’s best interest to let go. It was pretty cold of Liam to dump Ivy at Aly’s (Ashlyn Pearce) funeral. At least Wyatt is showing that he’s in Ivy’s corner.

Does Ivy realize what a good thing she has going? Wyatt and Ivy may be stable for now, but B&B rumors hint that there will inevitably be trouble down the road. No soap couple stays happy forever. Stick with “The Bold and the Beautiful” to see if their relationship will be put to the test.

So B&B fans, what do you think about the news that Maya will worry she shouldn’t have asked Nicole to carry a baby for her? Will Nicole surprise Maya by agreeing to do it? How will Zende react when he gets updates on Nicole’s decision? Does big drama lie ahead for Wyatt and Ivy? Let us know what you think in the comments below and don’t forget to check CDL often for the latest “Bold and the Beautiful” spoilers, rumors, updates and news.