The Bold and the Beautiful (B&B) Spoilers: Obba Babatunde Dishes on Julius’ Reaction to Nicole’s Surrogacy – Shock and Horror!

BY Heather Hughes on October 13, 2015 | Comments: one comment
Related : Soap Opera, Spoiler, Television, The Bold and the Beautiful 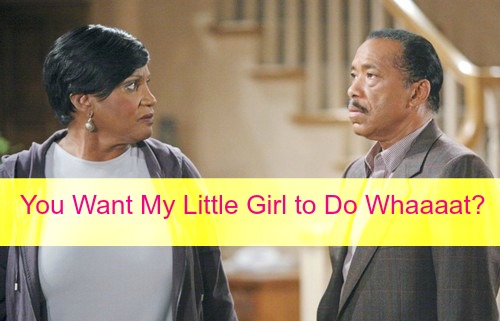 “The Bold and the Beautiful” spoilers tease that Mom and Pop Avant are headed back to Los Angeles. In fact, they’re moving there! It sounds like Maya (Karla Mosley) and Nicole (Reign Edwards) can expect just as much drama from their parents this time around. Naturally, a hot topic of discussion will be Maya’s surrogacy request. You can bet that Julius (Obba Babtunde) won’t be pleased by the news.

Even Vivienne (Anna Maria Horsford) might find herself a bit taken aback. In an interview with TV Insider, Obba Babatunde dished about the Avants’ return to the CBS soap and all the trouble they’ll stir up.

Despite the horrendous scene at Rick (Jacob Young) and Maya’s wedding, it appears Julius doesn’t want to cut ties with his daughters. It’s clear that Julius is the kind of man that doesn’t give up. Julius’ stubbornness seems to be a big factor in the move to L.A. “He just can’t rest being 2,500 miles away from his girls,” Babatunde noted. “Julius is like a bad penny, baby! You can’t get rid of him that easy.”

Julius was already concerned about how Maya’s decisions would affect Nicole. Now that the whole surrogacy thing has come up, Maya had better watch out. “The Bold and the Beautiful” spoilers reveal that Julius is going to blow his top. “It’s like ‘Jaws.’ Just when Julius thought it was safe to go back into the water…boom! This is an overwhelming development,” Babatunde said.

While Julius undoubtedly won’t display his emotions in the appropriate way, he’s justified in being shocked. Nicole is a young woman who’s still trying to wrap her head around adulthood. Now Maya wants her sister to put everything on hold so she can secure her own future with Rick. Julius will be completely stunned to learn Maya asked Nicole to have a baby for her. Babatunde teased, “The poor guy is, like, ‘Whoa. Wait a minute. You want my little girl to do whaaaat?’ How Julius and Vivienne deal with this is going to be very interesting.”

In the end, Babatunde argued that “Julius is Julius” and he’s always going to have his opinions on how his daughters should behave. The question is: will Julius’ point of view change anything? It’s possible that Julius’ doubts could begin to creep in for Maya, Nicole or both. B&B rumors hint that this surrogacy storyline could have several twists and turns coming. You can check out Julius and Vivienne’s first day back on October 22. Stay tuned to “The Bold and the Beautiful” to see all the Avant family battles that lie ahead.

So B&B fans, what do you think about the news that Julius and Vivienne are returning to the show? Are you looking forward to the drama they’ll bring? Will Julius cause Maya and Nicole to make some updates to how they’re approaching this surrogacy decision? Let us know what you think in the comments below and don’t forget to check CDL often for the latest “Bold and the Beautiful” spoilers, rumors, updates and news.