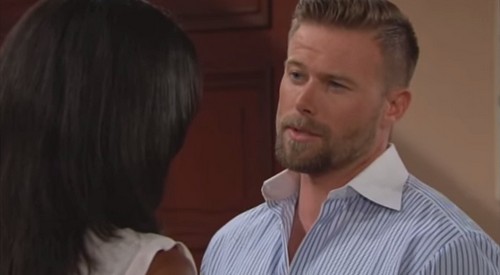 “The Bold and the Beautiful” spoilers for Thursday, September 17, tease that Bill (Don Diamont) and Katie (Heather Tom) will pay Liam (Scott Clifton) and Steffy (Jacqueline MacInnes Wood) a visit. It seems they want to see what all the fuss is about. Wyatt (Darin Brooks) let them know that Ivy (Ashleigh Brewer) was suddenly fired and they’ll be curious about the reason. Of course, Steffy and Liam can’t bring up the video or Ivy’s blackmail scheme. Instead, they’ll probably just say that Steffy can’t trust Ivy and that’s that.

Bill will wonder why Liam is turning on the woman he married not too long ago. Liam claims he still cares about Ivy, but his actions tell a far different story. When it comes down to it, Liam does whatever Steffy wants and it could land him in hot water. “The Bold and the Beautiful” rumors hint that Liam will find himself caught in the battle between the Spencers and the Forresters. It sounds like things could get pretty messy as the power struggle begins.

In the meantime, Steffy will indicate that this is a private matter and it doesn’t concern Bill. It might not be the smartest move to play hardball with Bill right now. Wyatt will declare that he can prove he’s more of a Spencer than Liam. Bill typically favors Liam in most situations, but the tide could be turning. Will Bill give Wyatt a chance to show he has true Spencer moxie? Time will tell, but it’s clear that Wyatt is a man with a plan. Spencers don’t usually take no for an answer.

Other B&B spoilers reveal that Rick (Jacob Young) and Maya’s (Karla Mosley) marriage will hit a slight bump in the road. It appears they’ll be victims of discrimination. Fortunately, they’ll take it in stride. Rick will tell Maya that he already had his meltdown back when Bill stirred up trouble. Maya and Rick will realize that there are always going to be haters out there. At the end of the day, they care about each other and that’s all that matters. Stay tuned to “The Bold and the Beautiful” for updates on Rick and Maya’s developing love story.

So B&B fans, what do you think about the news that Bill and Katie will press Liam and Steffy for answers? Will their response cause Bill to side with Wyatt? Will Rick and Maya find a way to ignore the discrimination they’ll likely continue to face? Let us know what you think in the comments below and don’t forget to check CDL often for the latest “Bold and the Beautiful” spoilers, rumors, updates and news.