The Bold and the Beautiful Spoilers: Rick and Ridge Do Battle Over Caroline and Forrester Creations

BY Hana Holliday on June 14, 2015 | Comments: one comment
Related : Soap Opera, Spoiler, Television, The Bold and the Beautiful 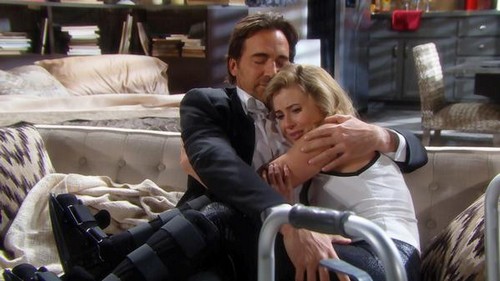 The Bold and The Beautiful spoilers indicate that the battle between Rick Forrester (Jacob Young) and his older brother Ridge (Thorsten Kaye) is far from over. This time according to the B&B rumors and spoilers, Rick will confront Ridge about his relationship with Rick’s ex-wife Caroline (Linsey Godfrey). Fans have watched recently as Caroline has been away from Los Angeles visiting her mothers in New York so she has managed to avoid being in the heat of the battle but it looks like that is about to end.

Bold and The Beautiful fans have seen that while Caroline is in love with Ridge and he has supported her in her time of need after an accident that left her wheelchair bound she still seems to have a deep connection with Rick. Her ex will take this as a sign and go to confront Ridge about their relationship informing him that it may not be as strong as Ridge thinks it is.

B&B Spoilers indicate that Rick may still have feelings for his ex-wife and that he will use her support in his time of turmoil to take advantage and drive a wedge between the couple. Ridge and Caroline have been one of the strongest and most talked about couples on The Bold and the Beautiful and fans have really been drawn to the pair despite the huge age difference.

Bold and the Beautiful spoilers say that Rick will claim that Caroline is not really in love with Ridge, and in fact still has feelings for him. The rumors say that Rick will use her recent visit to the Forrester mansion after Rick’s girlfriend Maya Avant (Karla Mosely) left him as evidence of Caroline’s lingering feelings for him and throw the visit in Ridge’s face.

Bold and the Beautiful fans know that Rick has always felt that he lived in Ridge’s shadow and would do anything to get out of it. He wants to prove that he is the better Forrester brother. The two of them have competed relentlessly for their father’s love. Now it appears that focus has shifted and they are now competing for Caroline’s.

The battle for Forrester Creations is not over yet as well. While the brothers battle for the affections of Caroline Bold and the Beautiful spoilers indicate that Rick will be secretly working on a plan to get back into the top spot at Forrester Creations. Fans watched as Rick gave up the job when Bill Spencer (Don Diamont) told him that the only way he would back him was if his girlfriend Maya, who is transgender had nothing more to do with the company and Rick walked out.

Rumors say Rick is plotting to overthrow Ridge from the top spot and Ridge. Steffy (Jacqueline Maccinnes Wood) and Liam (Scott Clifton) have no idea what he is up to. This will also affect Caroline because Liam is her cousin and Ridge is the man she is in love with. Spoilers indicate that she will have to make a choice both personally and professionally.

So fans what do you think? Who will Caroline choose? Will she choose Ridge, the man who has loved and supported her in her most trying times? Or will she choose Rick, the man who has treated her badly, but still seems to carry a torch for her deep in his heart? Also how far will Rick go to get back the CEO position at Forrester Creations? Will Ridge be able to stop him?

Stay tuned to CBS The Bold and the Beautiful and come back to CDL for more news, spoilers and rumors. Please let us know what you think and leave your thoughts and comments in the section below.