The Bold and the Beautiful (B&B) Spoilers: Wyatt and Liam Go to War Over Steffy and Ivy

BY Sean O'Brien on December 27, 2015 | Comments: one comment
Related : Soap Opera, Spoiler, Television, The Bold and the Beautiful 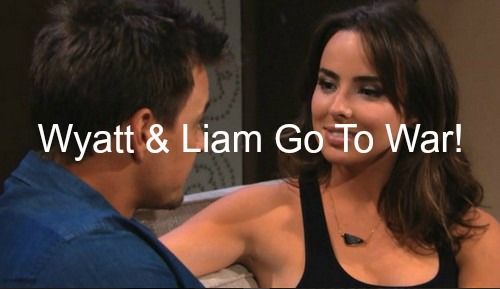 “The Bold and The Beautiful” (B&B) spoilers reveal that a Spencer civil war is about to erupt between Wyatt Spencer (Darin Brooks) and Liam Spencer (Scott Clifton) – and it’s all about the ladies – or is it more than just bickering over bad romance?

Like many brothers, Wyatt and Liam can’t seem to share their toys and each wants what the other has. But in the case of the Spencer boys, the toys are Hope Logan (Kim Matula), Steffy Forrester (Jacqueline MacInnes Wood) and Ivy Forrester (Ashleigh Brewer).

What makes all this worse is that one toy is trying to break the other as Steffy continues to get aggressive with Ivy. Wyatt and Liam first try to get the women to make peace, but then end up taking sides with Steffy and Ivy.

But then the whole dynamic changed after Ivy’s electrocution. Something snapped in Ivy’s head and she decided she has to have Liam and still loves him. She tells Liam repeatedly and makes him agree to rethink their relationship as a condition of dropping the restraining order.

That’s bad enough, but B&B spoilers indicate that Liam will finally reciprocate Ivy’s feelings and that will set off a nuclear chain of events involving Steffy and Ivy and that will pit brother against brother in coming days.

When Liam admits that he also still loves Ivy, Steffy will overhear and confront Liam. That’s pretty bad, but no one has told Wyatt that Ivy is doing any of this. Wyatt will propose to Ivy – clueless that she has the hots for Liam.

This is like the debacle with Hope all over again. Wyatt again wants a woman who wants his brother. Wyatt has had enough. Hope wanted Liam – Steffy wanted Liam – and now Ivy also wants Liam. Where does that leave Wyatt? Angry. Very angry.

Wyatt feels like Liam is constantly sabotaging his happiness. Liam had years with their dad Bill Spencer (Don Diamont) and then Liam had Hope, then Steffy, and now Ivy. Wyatt feels shortchanged and is understandably mad.

But now what? When Wyatt’s proposal to Ivy falls apart, Ivy plans to head to Australia, still unsure about her love life, even though Liam would have confessed love at that point.

Then Steffy will confront Ivy at the top of a flight of stairs even though Liam told Steffy to leave it alone, one of them gets hurt (guess who?). Maybe that restraining order was canceled too soon…

Ivy may still leave for Australia after this – although she may be in traction instead. Rumor has it that Ashleigh Brewer may take a short break and an Aussie trip may be an excuse to cover (or she could be in physical therapy).

With Ivy off the radar temporarily, that changes things. Plus, after Steffy’s latest aggressive action against Ivy, Liam will call off their engagement. Will Wyatt scoop up Steffy to spite his brother? That would be the perfect way to get some revenge.

That would be the perfect way to get revenge on Liam. Will Steffy go for it? Since Steffy’s mad at Liam for telling Ivy that he still had feelings of love for her, it’s likely Steffy may want to punish Liam.

Also cheerleading at the sidelines in the war of the Spencer brothers will be Quinn Fuller (Rena Sofer). Quinn has long seen Liam as undeserving of what he has and sees Wyatt as the far better man – heck she stabbed Liam before, so we know Quinn is no fan of his.

How far will the Spencer brothers’ war go? Will Liam go ahead and get involved with Ivy again to spite both Steffy and Wyatt? Who will be hurt in all of this? What do you think B&B fans, who do you want to see Wyatt end up with and whom with Wyatt?

Do you think Wyatt will be justified in his outrage at Liam? Is Liam intentionally taking from Wyatt or is it just a string of coincidences? Share your thoughts in the comments below and check back with CDL daily for more “The Bold and The Beautiful” spoilers and more.