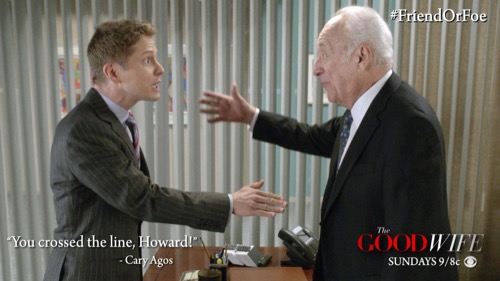 Tonight on CBS The Good Wife starring Julianna Margulies continues with an all new Sunday November 1, season 7 episode 5 called, “Payback” and we have your weekly recap below. On tonight’s episode, Jason (Jeffrey Dean Morgan) uses aggressive investigative tactics when he assists Alicia (Julianna Margulies) and Lucca (Cush Jumbo) with a student loan case.

On the last episode, Alicia clashed with a bond court judge when she agreed to support a client’s plea of innocence in a shoplifting case. Meanwhile, Diane was coerced into arguing against her own beliefs in a case focusing on physician-assisted suicide. Did you watch the last episode? If you missed it, we have a full and detailed recap right here for you.

On tonight’s episode as per the CBS synopsis, “Jason uses aggressive investigative tactics when he assists Alicia and Lucca with a student loan case. Meanwhile, Howard Lyman alleges ageism at his firm and accuses Cary as the primary offender; and Eli stirs up Florrick family drama on Peter’s presidential campaign.”

Tonight’s season 7 episode 5 looks like it is going to be great and we’ll be updating it live for you beginning 9PM EST.

Tonight’s episode of The Good Wife kicks off with Alicia meeting with a client named Maggie – who has been harassed and threatened by a bill collector for her student loan. She plays a recording for Alicia – the bill collector is screaming at her, threatening to garnish her wages, saying he is coming to her house and he is going to knock on her neighbors doors and let them know that she owes money. The whole time the bill collector is yelling at Maggie, she is sobbing on the phone that she already paid the bill.

Jason and Lucca sit in on their meeting – Maggie admits that she might not be able to pay them for her services. It’s Lucca and Alicia’s first case together though, and Alicia agrees to work for $150 an hour. Jason calls Bob Bindi, the bill collector that has been threatening Maggie. Bob insists that he is just doing what his boss Nelson tells him to do, but promises to lay off from Maggie. Jason takes Alicia aside and tells her that he thinks APY Collections is charging Maggie twice and playing some sort of shell game with her money – Alicia tells Jason to look in to it.

In his closet sized office Eli is having a meltdown, his daughter says it is time for an intervention. He has been watching Peter’s press interviews all day. Eli rants to his daughter that Ruth made Peter look like a fool, and he knows that Peter is going to want to hire him back after this. She tells her dad it is time for him to move on, he got fired, he needs to pack up his closet sized office and go look for a new job.

Jason visits Nelson at APY Collections and he asks him about his Michigan office – the checks that Maggie has had cashed have been mailed to Michigan. Nelson is confused, he says that there is no APY Collections Office in Michigan. Jason heads back to Alicia’s office and meets with her and Maggie – she explains that a few months ago she got a voicemail from APY COllecitons telling her that the payment address had changed and she had to mail her payments to Deerhorn Park in Michigan. Maggie is confused, Jason explains that either APY Collections’ computer was hacked and they stole Maggie’s information, or else Nelson sold her information to a scam artist. Either way, Maggie still technically owes $8,000 to APY.

Meanwhile, Alicia and Lucca are scheming – they think that Maggie should sue Colosseum University. She is $46,000 in debt for an education that hasn’t yielded her any decent paying jobs. Alicia and Lucca head to meet with the legal rep for Colosseum, he laughs at them and reveals that when Maggie was accepted she signed an arbitration clause. If she is going to sue the school, all issues have to be settled within 18 months after her graduation date. And, she graduated 17 months ago.

Back at Peter’s office, the press annihilates him just like Eli said they were going to after his interviews. Peter comes storming through the office like a mad man when he sees the headlines and Eli is thrilled – he thinks this is his big chance to get his job back. Just as he is about to offer to help Peter clean up Ruth’s mess, Ruth informs Peter that their secret plan to insert his own foot in his mouth is working and he is ahead in the polls. Obviously, Eli is devastated.

Alicia and Lucca head to litigations with the lawyer from Colosseum University. First Alicia and Lucca call one of Maggie’s teachers up for questioning. They argue that she isn’t even a licensed hygienist and she was supposed to be teaching Maggie how to be a dental hygeniest. They give the teacher a copy of a test that Maggie had to take at the end of the class – and the teacher doesn’t even know that answers to the questions. Meanwhile, back at Peter’s office – Eli’s daughter returns, she has found him a job with Mr. Nitali making double what he is making at Peter’s office. She begs him to “move on.”

Jason heads to Deer Park to investigate the office where Maggie’s checks were being mailed to. When he arrives, he learns that whoever rented the office – skipped town over a month ago. But, he did find a stack of envelopes full of checks that were never mailed. Alicia’s arbitration against Colosseum isn’t going well, she calls Jason for help and says that she needs proof that the college has lied to their students.

Marissa heads to Alicia’s house – she wants her to fire Eli as her chief of staff so that he will leave Peter’s office and take the campaign job that she found for him in Israel. Marissa explains that her dad will never leave on his own accord, that’s why she needs Alicia to fire him. If he is unemployed then he will have no choice but to take the new job.

Jason heads to Colosseum, he meets with a rep named Duffield and learns about the “90/10” rule. Maggie is an army vet, so Colosseum followed the 90/10 rule, ad got 90% of her tuition paid for with financial aid, and then Maggie had to come up with the other 10%. But…Maggie a vet which means that Colosseum also received money from the GI bill for Maggie to go to college on top of her 10% and the 90% of financial aid. Alicia heads back to arbitration and calls Duffield up to explain the 90/10 rule. Afterwards, Colosseum calls Maggie up to testify and reveals that she missed 2/3 of her classes and she didn’t even buy text books.

Afterwards, Maggie explains to Alicia and Lucca that she met with a study group to catch up on classes that she missed – and the reason that she didn’t buy books was because they printed out PDF’s of the texts. Maggie brings her entire study group ( over a dozen people) to Alicia’s office – now they want a class action lawsuit. Alicia explains that they can’t sue the school because they all signed the agreements saying that they wouldn’t – however they CAN all go on a debt strike and refuse to pay off what they owe.

Alicia has to do an appearance with Peter, her debt strike against Colosseum is thrown in their faces. The unions are furious that Peter is trying to do away with them, but his wife is busy forming a union of her own. Ruth is furious, she thinks Eli is still trying to sabotage Peter’s campaign. And, Eli has no intention of stopping any time soon – he calls the office in Israel where Marissa got him a job and tells that he is not coming, he has unfinished business in Illinois.

Jason is busy trying to track down the scam artist that was stealing Maggie’s college loan payments. He learns that they left a new voicemail with a new address. He tracks down the scammer at his house. Meanwhile, Alicia heads home and finds Eli waiting for her – he informs her that he is staying at Peter’s office, and Alicia agrees. Then there is a knock on the door, it’s Colosseum’s lawyer – the college is suing Alicia and Lucca personally because they tried to interfere with their contracts with their students. Lucca and Alicia fight back – they encourage the college’s shareholders to file suit against the college as well, and Colosseum is caught between a rock and a hard place, they have no choice but to settle with Alicia and Lucca because their stock is dropping rapidly and they can’t afford all of these lawsuits.

Later that night Jason shows up at Alicia’s house – he has Maggie’s money from the scammer, Alicia is impressed that he actually got it back and she flirts with him and invites him inside for a drink.