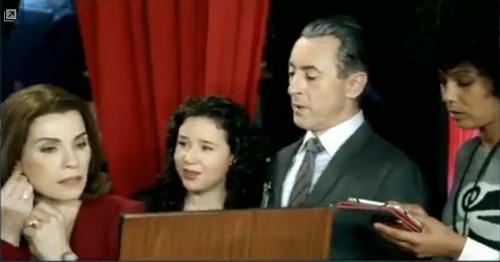 The Good Wife spoilers and synopsis for season 6 episode 12 ramp up the tension as Alicia battles to become State’s Attorney. The Good Wife has always sustained a high level of quality through intense and realistic court cases, and it’s not about to give up that mantle now. Based on the promo video for Season 6 Episode 12 [title still to be announced], Alicia Florrick [Julianna Margulies] and Frank Prady [David Hyde Pierce] will face off in an intense debate in a race for State Attorney. Meanwhile, Peter Florrick [Chris Noth] and the rest of the city reportedly prepare for a potential riot, and in an ironic mirroring of real-life events, we know that ain’t no cup of tea.

Unfortunately for fans of Alicia Florrick, it doesn’t look like she keeps her cool during the debate, because the video shows her stumbling during a crucial question, with people in the sidelines questioning what she’s doing.

But even though all of her aides and assistants try and help her out, Alicia pulls herself together and as always, figures out what she’s doing. She says ‘I’m winning this’, and the funny thing is, she probably will. However, the Good Wife has always prided itself on being unpredictable, so there’s a chance that the writers could just be throwing us a curve ball by having her lose. Not only would that keep the momentum going, but it would also allow David Hyde Pierce and his fantastic acting to stick around for a few more episodes.

The Season 6 Episode 12 spoilers don’t reveal too much about what goes down during the actual debate, and nothing in the promo video shows anything about the preparation for the potential riot, so we’ll just have to tune in this Sunday 9:00 PM ET/PT on CBS to find out.

What do you guys think about the spoilers for the Season 6 Episode 12 episode of The Good Wife? Let us know your thoughts in the comments below, and also let us know whether you think Alicia Florrick will once again pull off the surprise win.