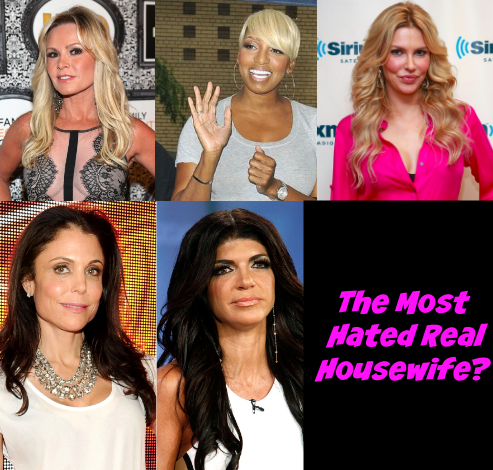 Mirror, mirror on the wall, who is the most hated Real Housewife of them all? Millions of devoted fans tune in to Bravo to watch RHONJ, RHOA, RHONY, RHOBH, and RHOC. But, do you really sit through an hour of reality TV because you love the housewives? Or are you more like me, and you just love to hate them? We’ve put together a list of housewives that we despise the most. And, trust me it wasn’t easy – narrowing down the worst of the worst. Check out our list of “Most Hated Housewives” below and don’t forget to vote in the poll and let us know which Real Housewife you think is the most hated.

Real Housewives Of Orange Country: Tamra Barney-Judge – This really was a no brainer, I would honestly rather go for a swim in a pool full of piranhas than spend an hour with Tamra. Sure, on Real Housewives Of Orange County she acts like a total trashball, lies, and stirs up drama every season. But, she’s just playing her part. The reason Tamra Barney is at the top of my most hated housewife list is because of the simple fact that she chose reality TV and D-List celebrity status over her own children.

If Tamra had quit RHOC years ago, then her ex-husband Simon wouldn’t have taken custody of her kids away, and her oldest daughter Sidney would still speak to her. Sidney expressed in court how much her mother’s gig on RHOC has embarrassed her and destroyed her social life – and Tamra could care less. She just cries that Simon turned Sidney against her. No Tamra, you turned Sidney against yourself by acting like trash on national television – after she literally begged you to stop.

Real Housewives Of Beverly Hills: Brandi Glanville – Believe it or not, Brandi Glanville actually has a handful of loyal fans out there – but I have no idea why. She’s a walking contradiction. Women seem to think that her blunt comments and in your face attitude is empowering and bad-ass, and means she is a strong and independent woman. But, there is nothing empowering or bad-ass about chasing after guys and having a new boyfriend every other month.

If anything, that’s pretty much the opposite of being a strong woman. Secondly, her true colors really shone through this year when she was “fired” or “quit” (depending on who you ask) RHOBH. The fact that she can’t give anyone a straight answer and keeps teasing “huge projects” that never seem to come to fruition on social media is just annoying at this point. Speaking of social media – somebody needs to get this woman a tutor. There is nothing more annoying than a middle-aged woman who spells worse than her own children.

Real Housewives Of New York: Bethenny Frankel – Oh, Bethenny. Real Housewives Of New York is literally the most painful reality TV show to sit through, it’s so awkward and unnatural. And, Bethenny Frankel is the queen of awkward and unnatural. If we have to pick on reason that we truly can’t stand her – it would be the fact that she thinks of herself as Real Housewife royalty and truly believes she single-handedly saved the Bravo reality show by coming out of retirement. Oh yeah, and that creepy picture of her wearing her 40 pound daughter’s pajamas is still burned in our memory.

Real Housewives Of Atlanta: Nene Leakes – At one point Nene was pretty funny to watch, and then she realized that people enjoyed her watching her, and her already inflated ego became so large that there is hardly any room for any of the other housewives to even sit in the same room with her. Now, Nene is demanding more money than some C-List celebs receive for appearances and contracts – and she threatens to quit the show basically every season because she honestly believes the show will not go on without her. If Nene Leakes humbles herself and takes her ego down a few notches, then we will take her off the “Most Hated” list … but until then.

Real Housewives Of New Jersey: Teresa Giudice – Does this one really require an explanation? Teresa and her hubby Joe scammed millions of dollars, and then had the audacity to rub their lavish lifestyle that they weren’t even actually paying for in everyone’s faces. The greediness of the Giudices is downright nauseating.

And, the fact that they committed numerous frauds knowing damn well that they could go to prison and leave their kids without one of both of their parents is probably the most selfish thing that they have done. Also, maybe my “Girl Power” is a bit over the top, but I can’t really stand any woman who allows their husband to publicly cheat on them and mortify them numerous times, yet continues to stick around.

So Real Housewives fans, do you think any of these women didn’t deserve to be on the “Most Hated” list? Who do you think is the worst of all: Nene, Tamra, Teresa, Brandi, or Bethenny? Share your thoughts in the comments below and don’t forget to vote in the poll!