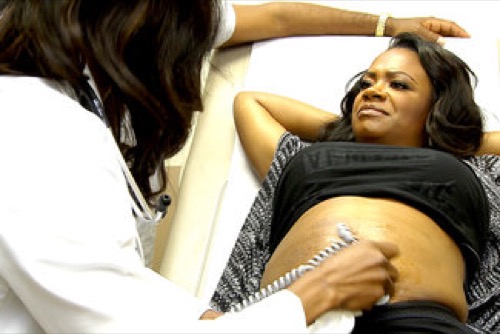 Tonight on Bravo The Real Housewives of Atlanta continues with an all new Sunday December 6, season 8 episode 5 called, “Where is the Love Boat?,” and we have your recap below. On tonight’s episode Cynthia Bailey and Porsha William’s argument quickly takes a turn for the worse and drama ensues on what was supposed to be a fun, girl’s booze cruise. Back on land, the group is in discord as everyone’s version of what happened causes conflict amongst the ladies. In the aftermath of the lake trip, Peter returns home from Charlotte to console Cynthia, forcing them to work on their marriage.

On the last episode, Kenya made a surprise visit to Chateau Shereè and was astonished by what she uncovered. After Cynthia and Peter’s emotional talk surrounding their relationship, Cynthia talked with Kandi about the uncertainty of her marriage. Meanwhile, Porsha and Duke hit a bump in the road. Sensing Cynthia needing a shoulder to lean on, Kenya suggested a day trip on a boat with the girls to take her mind off things. The ladies set sail for a tranquil afternoon booze cruise of fun and sun but things quickly took a turn for the worse when Cynthia and Porsha clashed — shocking everyone on board. Did you watch the last episode? If you missed it, we have a full and detailed recap right here for you.

On tonight’s episode per the Bravo synopsis “Cynthia and Porsha’s argument quickly takes a turn for the worse and drama ensues on what was supposed to be a fun, girl’s booze cruise. Back on land, the group is in discord as everyone’s version of what happened causes conflict amongst the ladies. In the aftermath of the lake trip, Peter returns home from Charlotte to console Cynthia, forcing them to work on their marriage. Kandi visits the doctor and comes face-to-face with some troubling news. Kenya and Porsha meet to discuss the altercation between Porsha and Cynthia, but the conversation quickly turns into a reminder of their troubled past. The ladies then all come together in an attempt to unite the group and repair the splintered friendships.”

Porsha says she and Cynthia have had years of issues and she is wondering if they are really going to fall out over this.
Cynthia waves her finger in Porsha’s face, saying that all she can do is tell her how she feels.

Porsha begins waving her hands in Cynthia’s face as well, and the two of them continue to put their hands in each other’s faces until Porsha gets too close to Cynthia and Cynthia kicks her in the stomach. This makes Porsha go beserk and she lunges at Cynthia. The two of them begin to brawl until a man has to pull Porsha off of Cynthia and subdue her on the other side of the boat. At this point, Porsha is screaming and crying.

Kim Fields says in confessional that she has a low tolerance for foolishness, and she has never been around something like this.

Kenya goes up to the captain and says that the two women need to be removed from the boat. Meanwhile, Tammy is nowhere to be found. Shamea comforts Porsha and Kenya comforts Cynthia, who hides in a bedroom and says she needs to be alone. Shamea and Porsha leave in a small motorboat, calling the party “an old tired party for old tired people.” Despite her issues with Peter, Cynthia calls him and tells him she had a fight with Porsha that got physical and she needs him to come home. He agrees. Tammy comes back to the group in a fresh outfit, and tells Kandi she was changing while the altercation occurred but could hear the screaming.

Porsha tells her family that what Cynthia did with kicking her in the stomach was the most hurtful thing she has ever experienced in her life. She says that she has been supporting Cynthia, and that she knows so much about her husband and if she wanted to say something about her she could. She says that whatever Cynthia does now is in her court.

Kim and Phaedra hang out.  Kim tells her that for the most part the boat ride was lovely, but then everything started happening real fast. Phaedra tells her a lot of deaths have occurred at that lake and she knew something would happen.  Kim tells her about the fight between Cynthia and Porsha, which started when Cynthia told Porsha she would go talk to Kenya about Porsha’s friend Shamea, whom Kenya was trying to kick off her boat, and Porsha responded “whatever, bitch” in an arguably rude manner. Phaedra tells Kim that she saw bruises on Porsha’s stomach and her legs with her own eyes. Kim says in confessional that this situation is being analyzed like the JFK assassination.

Kenya tells her aunt about the situation, and her aunt tells her to hold another get-together and invite everyone, including Porsha. Kenya decides she will take this advice.

Peter comes home to Cynthia. She says she keeps thinking she could have done something else to get out of the situation. Peter says she couldn’t have, but it’s going to be hard when you hurt someone. Cynthia takes offense to the statement that she hurt Porsha, and tells him repeatedly to stop saying that. They start to argue, and Peter says he doesn’t want to talk about this girl with her. He says that the issues Cynthia is having have nothing to do with Porsha. He tells her to apologize to her when she sees her, but they need to talk about them. Cynthia says they need to try harder because she feels like she is losing something. Peter says that if she is telling him she is willing to work on their relationship, he is more than willing to work on it.  Cynthia says she is, and gets up and hugs Peter.

Kandi and Todd go to the doctor to check up on their baby. During the middle of the appointment, Todd leaves to take a phone call, which bothers Kandi.

Cynthia calls Kenya, distressed about the fight with Porsha. Kenya says everything is going to be okay, and she knows Cynthia feels crappy right now, but it was just an unfortunate situation. Cynthia says that is not who she is or who she wants to become, and she feels awful. Kenya tells her that she is going to try to fix it by setting up another get together, a brunch including Porsha. Cynthia asks if she thinks that is too soon, and Kenya says that she and Porsha prolonged their own issues by putting it off for too long, which only caused them to fight more.

Kenya and Porsha meet at a restaurant.  Kenya tells her she wanted to take some time to discuss what happened at the boat and check with her to see how she is feeling about the whole thing. Porsha says when she first got on the boat, it seemed like everything was going fine until Kenya started taking shots at Shamea and tried to have her escorted off the boat. Kenya says it’s almost like she’s trying to place the blame on her. Porsha tries to interrupt her by saying “no,” but she cuts her off and continues. Kenya says it doesn’t matter how things started, it’s how you deal with the situation. She says that out of all the girls she has perspective that no one else does because they have fought and had it turn physical.

Kenya says she went there and said she was going to apologize, but that’s not what happened. She says Porsha straddling Cynthia is what ended in violence. Porsha says she doesn’t want her trying to talk to her about this. “For one, I don’t trust you,” she says. She says that if she were talking to a friend, this conversation wouldn’t go this way.
Kenya says she isn’t saying anything that’s not a fact. Porsha says Kenya has no compassion for her and she knows that. Kenya tells Porsha that she is coming across hostile, violent and on guard.  Porsha says she doesn’t need to justify her actions to anyone. “But you do,” Kenya responds. Porsha says that if Cynthia wants to talk to her she can, because once the situation started it snowballed and neither of them could stop it. “And that doesn’t sound familiar to you?” Kenya says. “I’m done,” Porsha responds. Kenya redirects the conversation, saying it seems to be going in the wrong direction. Porsha says that she feels Cynthia was wrong in the situation and Kenya was wrong, and that the best thing that can be done is for her and Cynthia to confront it and be done with it.

Kenya holds her brunch. Sheree and Phaedra are in attendance. Kim immediately brings up the elephant in the room, before Kenya and Porsha even arrive. Yes, Kenya and Porsha arrive at the brunch together.  They sit down and Porsha asks what they have been talking about. Kenya says she wanted to bring everyone together in light of what happened the last time they were together. (She actually uses the phrase “in lieu,” which is wrong. God bless her.)

Kim says that as the new person she isn’t picking sides, but asks where they are. Porsha asks Cynthia outside to talk privately. Cynthia asks Porsha if she is okay, and she says she is fine, and that there is just bruising and she took a day off work. Porsha says that the emotional wounds from the situation impacted her more.

Back at the brunch table, Kenya tells everyone that when she talked to Porsha she wanted to explain herself but not take responsibility. Kandi responds that she thinks Kenya is actually good at explaining what the other person in a situation did wrong, but not necessarily what she herself did wrong. “Jesus take the wheel, and drive fast,” Phaedra says in confessional. Kenya says she was trying to be a grown up and a woman and have a grown lady conversation with Porsha about how they got to that point. Kandi tells Kenya she can’t tell Porsha how she is supposed to feel when she is feeling some type of way, and Kenya says she is glad Porsha has such an advocate and she wished she had such a good advocate when stuff happened with her.

Porsha and Cynthia, meanwhile, have a very calm and rational conversation about the events that occurred, apologize and make up.