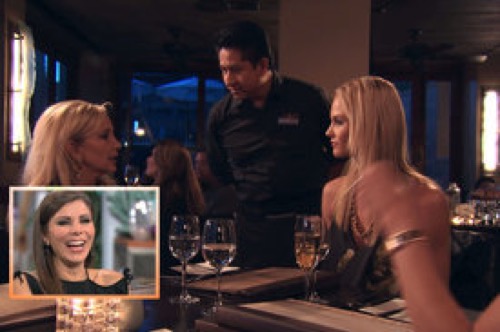 The Real Housewives of Orange County returns to Bravo tonight with an all new Monday October 19, season 10 episode 20 called, “Reunion Part 1, and we’ve got your recap down below! On tonight’s episode, the reunion kicks off with the Housewives gathering on the couch to rehash the past year. Meghan King Edmonds makes her mark on her first reunion by clashing with Vicki Gunvalson over her step-mom comments and demonstrating what “Judgey Eyes” really looks like. Tamra Judge reveals the heartbreaking family drama she has been keeping secret for the past year.

On the last episode in the season finale, the ladies gathered together to witness Tamra’s baptism, but with the constant questions and confusion surrounding Brooks’ cancer, Vicki was the one who felt crucified. And after an evening of avoidance, Shannon and Vicki came face-to-face when Shannon discovered that Vicki had committed the ultimate betrayal. Did you watch last week’s episode? We did and we recapped it right here for you.

On tonight’s episode per the Bravo synopsis “The reunion kicks off with the Housewives gathering on the couch to rehash the past year. Meghan makes her mark on her first reunion by clashing with Vicki over her step-mom comments and demonstrating what “Judgey Eyes” really looks like. Tamra reveals the heartbreaking family drama she has been keeping secret for the past year. Plus, a Housewife from the past speaks her mind about Tamra’s religious transformation and Vicki shares hilarious memories of her late mother.”

Tonight’s episode is going to be filled with the usual Housewife drama and you won’t want to miss it, so be sure to tune in for our live coverage of the show tonight at 9 PM EST! While you wait for our recap hit the comments and let us know how excited you are about this reunion episode of The Real Housewives of Orange County.

Meghan has changed her signature blonde hair to a dark brown. Cohen asks her if she is a natural brunette, and she laughs, saying she doesn’t know.

A reader question, which refers to Tamra as the ‘hottest grandma in the OC,’ asks how Tamra’s new granddaughter is doing. Tamra says her grandchild is doing fine and she and her parents are still in the place that she got for them.

Cohen reveals that LeAnn, Meghan’s husband’s ex, has passed away, asking Meghan how it has been for the family. She says it was hard to adjust to even though the death was expected. She also confirms that her step daughter, Hayley, has graduated high school.

Clips play recounting Meghan’s relationship with Hayley and the subsequent drama with Vicki criticising her for wishing she were Hayley’s real mother.

Vicki says she has witnessed friends and people who are close to her having their own biological children and their love of their children is different. She concedes that she has never had adopted children so she doesn’t know what it’s like. Meghan says that since she doesn’t know she shouldn’t talk about it.

Cohen asks Vicki if she thinks that adoptive parents’ love is lesser than biological parents’ love, and she says no, saying that her stepmother loved all of them the same. Meghan tells her that she’s contradicting herself because she just said that her own mother loved them all equally. Vicki says that she treated them all the same and didn’t bring up the matter of her being adopted. Tamra agrees with Vicki, saying she witnessed that with Ryan’s love of his stepchildren vs. his love for his newly born biological daughter.

Heather is asked about the fact that she was friends with both Meghan and Jimmy’s ex. Heather says that the couple didn’t break up because of Meghan, and that if that had happened she probably wouldn’t be able to be friends with Meghan. When asked, Meghan says that she has no problem with Jimmy’s ex and is able to keep things separate. Shannon brings up that Meghan once called the ex crazy, which Meghan admits to.  Heather tells her that she should never talk about the mother of the kids, ever.

Meghan calls out Vicki for telling her not to give Hayley a car despite the fact that she just gave her own daughter a car. Vicki says her daughter has a full time job and is a mother of two, and that she just believes that you should make your children work for things. She says her children understand work and appreciate money, and that she was just trying to give Meghan advice. She tells Meghan that she, Tamra, Heather, “everyone” were talking about how one has to hold their kids responsible for things.
Heather says she doesn’t think the issue is as black and white, saying that Vicki was making sweeping judgments when she criticized Meghan in the store.

Shannon is asked about being upset that Meghan gave Hayley birth control. Shannon says she was concerned that Meghan implied she was making the decision for her. Meghan says that at seventeen, Hayley is more than old enough to learn about sex, and that she is an adult in many ways so she needs to take responsibility. She tells Cohen about Hayley’s journey to maturity, saying that after her mother died she saw a clip of herself on the show being rude to her mother and felt bad about it. Meghan says she told Hayley that she can still apologize, and that Hayley made peace with it, “thank God.”

Cohen asks Vicki about her mother’s death. Vicki says she was just with Lisa and Billy last week and the void has actually gotten worse. She says she needs her mom, and there is no one who is there for her. She says it’s a terrible feeling not having a mom, because she never really believed she would die. She says she used to tell her mom that she wanted to die first because she didn’t want to deal with the pain.

Vicki talks about missing the phone call about her mother, which ended up going to Tamra’s phone instead. Vicki says when she watches the clip of herself finding out about her mother’s death and breaking down, that she was in so much shock she didn’t even really realize the cameras were on her. She says Bravo was gracious about the filming, asking her what she did and did not want included and interviewing her later.

Vicki confirms that her mom wasn’t ill before she died, had been gone for 5 hours before she was found, and there wasn’t an autopsy done because she didn’t want her all cut up. She says that she was told her mother died of something that took her quick, like a brain aneurysm, and that she was positioned like she was going to get up or sit down.

Tamra expresses her love for Meghan. She says Meghan makes her happy because she says the things she wants her to say. She says the two of them “just click” and that they both are outspoken and eager to speak the truth.

Cohen asks Shannon what the turning point was in her previously tumultuous relationship with Meghan, and she says it was when she helped LeAnn. Cohen then asks Meghan how she feels about Shannon now. “I love Shannon,” she says.

Tamra says that last year, her older daughter Sydney was at her dad’s and texted her. She came into the kitchen, sat down, and said “I don’t want to live with you anymore” and “you’ve ruined my dad’s life.” She says she suggested going to counseling and had no idea where this was coming from. She says that two years later, she still has not come back. She says she bought her a necklace and kept reaching out to her, and Sydney wrote her, thanking her for the necklace and saying maybe they could work things out.  She says that the next day she read rumors about herself in the papers and never heard from Sydney again. She continues to talk about how her entire family is broken after the divorce. Cohen asks her why she didn’t say anything if this was happening to her during filming. Tamra says it was embarrassing and humiliating.  She says that after all of this happened, a woman invited her to church and she just kept going.

Cohen asks Tamar when the last time was that she heard from her daughter, and Tamra says that Sydney testified against her in court. The other housewives agree that that is a result of parental manipulation by Simon. Cohen says that if Simon sees this, she will be hearing from him. She says that she doesn’t care anymore and is speaking out. Cohen brings up that Tamra forgave Simon at her baptism, asking her if she would do it again. She says yes, and that she wouldn’t be who she is if she had not gone through what she has.

Shannon says Tamra expressed remorse to her and they started taking baby steps to rekindling their friendship. She says Tamra told her about the hardships in her life and she could relate, and that she was also having a come to Jesus moment and was on her knees praying for things to get better.

Cohen asks Tamra how Alexis would feel about her transition to Christianity. Tamra says she hopes that she would be proud. Cohen reveals that he has a letter from Alexis. Alexis writes that she cannot sit back and watch a mockery be made of her savior. She says Jesus loves you as you are, but that doesn’t give you a hall pass to be baptized and then continue their awful and manipulative ways. Tamra says she’s the kind of Christians who give Christians a bad name. She says what she has to say to Alexis is that she is sorry she feels the way she does and will pray for her.