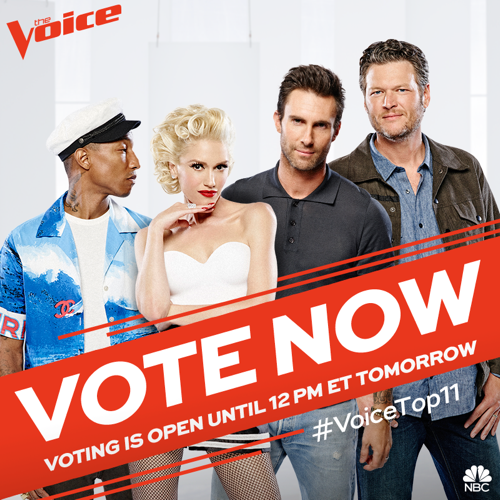 Tonight on NBC the Emmy award winning music competition The Voice continues with an all new Tuesday November 24, season 9 episode 21 called, “Live Eliminations,” and we have your weekly recap below. On tonight’s episode America’s votes are revealed in a results edition.  Last night’s episode was one of the strongest this season so it is anyone’s guess who is going home tonight.

On the last episode, the Top 11 artists performed; Jordan Smith, Jeffery Austin, Emily Ann Roberts,Madi Davis, Braiden Sunshine, Barrett Baber, Amy Vachal, Evan McKeel, Shelby Brown and Zach Seabaugh. Did you watch the last episode? If you missed it we have you covered with a full and detailed recap right here for you.

On tonight’s episode as per the NBC synopsis, “The results are in and an elimination will be made.”  One of the strongest performances last night was from Team Adam’s Jordan Smith who sang Jessie J’s Who You Are. (VIDEO HERE) CDL is predicted Jordan will be safe tonight.  Who are you rooting for?  Who do you think will be sent home tonight?

Tonight’s season 9 episode 21 is going to be exciting. We’ll be blogging it right here for you. In the meantime hit up the comments section and tell us your thoughts on season 9 of The Voice.

#VoiceResults starts with a performance by country star Brad Paisley. The top 11 then take the stage. Carson asks Emily Ann about Blake’s support. She says it’s overwhelming that he believes in her so much. Carson announces the first two artists that are safe and will move on. From Team Adam, Amy Vachal is safe. From Team Gwen, Braiden Sunshine is also safe.

Carson asks the judges about the talent this season and Blake says he’s blown away by them. Pharrell says the artists get progressively better every season but this year they are really taking the notes and are improving. The other nine come out to see who else is safe. Jordan is asked about his Gaga song choice and he says he’s glad he got to sing it and it embodies who he is.

Carson is ready to reveal two more names. From Team Blake, Zach Seabaugh is moving on to the top 10. Also safe is Jordan Smith from Team Adam. Back from the break, Team Gwen performs with their coach and they do New Radicals, You Get What You Give. Gwen, Korin, Braiden and Jefferey absolutely killed it. Really cool cover.

Then we see a glimpse at the artists having a Thanksgiving dinner with their families thanks to The Voice. Their parents get to hang out with the other contestants. They share things they’re thankful for and they guess who wrote down which. They end the evening singing together and doing Lean on Me. Jordan says they are all getting so close.

The seven remaining artists take the stage. Evan says he’s learned to play to his strengths and Pharrell has helped him with that. Team Pharrell’s Madi Davis finds out she’s safe and moving on. Then Tam Blake’s Emily Ann Roberts gets the good news that she’s also moving into the top 10.

Team Adam sings with his team – they do The Beach Boys, Wouldn’t It Be Nice. It’s very cool. Then the remaining five take the stage again. Carson reveals three to get it down to the bottom two who will sing for the instant save. Jefferey says The Voice has given him the opportunity to live out his dream. Team Gwen’s Jefferey Austin is safe and in the top 10.

Also safe is Team Blake’s Barrett Baber. Last is Team Adam’s Shelby Brown who is safe. Evan McKeel and Korin Bukowski will sing for the instant save. Evan sings Al Green’s Let’s Stay Together. Blake says he’s a fan of Evan’s and says it was really good. Pharrell says the coolest part of what they do is work with people like him with all this talent.

Korin sings Maroon 5’s She Will Be Loved. Adam thanks her for doing it and says it was beautiful. He says you have to vote for her and she got him. Gwen says Korin should be saved again and says she’s so proud of her. She says she feels like she’s had so much growth and is so talented and is an amazing singe who is incredible to watch.

Korin and Evan get last words from the coaches and then we find out the instant save went to Korin Bukowski!