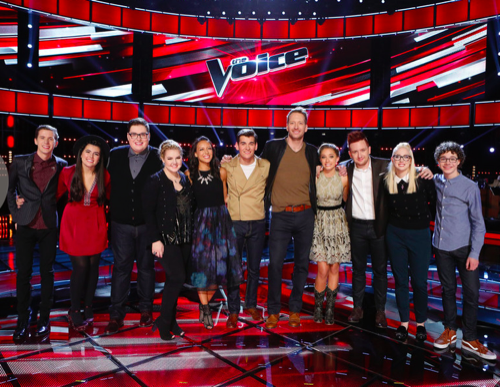 Tonight on NBC the Emmy award winning music competition The Voice continues with an all new Monday November 23, season 9 episode 20 called, “Live Top 11 Performances,” and we have your weekly recap below. On tonight’s episode the top 11 perform for the judges in the hopes of securing their place in the competition.

On the last episode, the results were in and when the window for the votes closed, the instant save went to Team Gwen Stefani’s Korin Bukowski. She rounded out the top 11. Pharrell Williams’ Mark Hood went home. Did you watch the last episode? If you missed it we have you covered with a full and detailed recap right here for you.

On tonight’s episode as per the NBC synopsis, “The top 11 artists; Jordan Smith, Jeffery Austin, Emily Ann Roberts,Madi Davis, Braiden Sunshine, Barrett Baber, Amy Vachal, Evan McKeel, Shelby Brown and Zach Seabaugh, perform live in front of coaches Adam Levine, Blake Shelton, Gwen Stefani and Pharrell Williams for America’s vote.” Who are you rooting for?  Who do you think will be sent home tonight.  Do you think Blake has the strongest team this season?

Tonight’s season 9 episode 20 is going to be exciting. We’ll be blogging it right here for you. In the meantime hit up the comments section and tell us your thoughts on season 9 of The Voice.

#TheVoice starts with Team Adam’s Shelby Brown who is doing You and I by Lady Gaga. She has her dad with her and she says he’s making a big sacrifice to be there with her. She put a nice country twist on the Gaga tune. Blake says Shelby loves Alabama and that was his favorite performance from her. Pharrell says she came out like a cannon.

Gwen says it’s crazy she’s 17 and says the song felt like her own. She tells Shelby to hold back the growl as an occasional treat. Adam says he promised Shelby a giraffe if she did well tonight but isn’t sure how to get her one. He says she killed it. Then he tells the audience they are bad at clapping. Team Pharrell’s Evan McKeel (VIDEO HERE) is next and he has his mom with him.

His mom tells Pharrell that Evan has been singing since he was young and at church. He’s doing Smile by Nat King Cole. His guitar playing is lovely and his voice is flawless, as usual. Gwen says Evan’s performance was beautiful and her favorite of his so far. She said his voice shined. Blake says he’s such a pro and says it was really good and says great job. Pharrell says he sounded great like always.

He says Evan let them connect with him and says this is about him introducing himself and he really did that. Next up is Team Blake’s Barrett Baber. Barret’s wife is there and he’s doing Delta Dawn by Tanya Tucker but rocking out on it. Blake says it’s perfect for Barrett to sing this. Blake asks his wife about their meet cute. He does the 1970s standard and it starts out like usual then turns it on its head.

Blake is on his feet cheering as Barrett finishes. Gwen says he’s amazing and says he mans the stage and commands the room. Adam says it was great then mocks Blake’s antics and calls him an idiot. He tells Barrett he’s awesome and says he likes to see him as a showman. Blake says this is a big night for Barrett. He says he took them all to church with that song.

Next is Team Gwen’s Korin Bukowski. Her dad is with her and Gwen says Korin’s performance for the instant save was amazing. Tonight she’s doing Only You by Mandy Moore. Her dad talks about Korin performing I’m Just a Girl when she was a kid. Every time we see her, she looks more like Gwen – I think Gwen is morphing her into a platinum mini-me. It’s cool but odd. She gets big cheers.

Adam says it’s hard to find an identity as an artist when you’re young then says she has evolved since the beginning of the season. Pharrell says she is coming into her own and recognizes the performance of being herself and knowing it’s her moment. Gwen says she’s so happy for her and says a powerful message went out through her song and says she’s so proud of her.

Next is Team Adam’s Amy Vachal and she brought her dad and they joke he looks like Walter White. Her dad taught her how to play guitar and he says he’s so proud. She’s doing Taylor Swift’s Blank Space in a cool, folksy sort of way. It’s pretty cool – the crowd seems to dig it and the cheers go on and on. Blake says he loves the flips they’re doing and suggest a song for Amy that he wrote.

Blake tells her it’s his favorite vocal from her. Pharrell tells everyone they need to go on iTunes and buy this song because it’s wonderful. Adam says she has taken her own approach to songs and says you have to do cover songs and she’s triumphed and made an album of great versions and says that’s the artistry he loves and he’s so proud of her. Next, Pharrell performs his song Freedom .

Zach Seabaugh is doing Thompson Square’s Are You Going to Kiss Me or Not and his mom is there. They talk about Zach’s dancing and Blake says he’s a threat to anyone in this competition. He’s driving the ladies wild. Blake laughs watching Zach work the screaming ladies. Blake is on his feet and the ladies are screaming.

Gwen says that’s cheating to do that because all the girls want to vote for him then he does a song like that. She says he looks so cute doing it and it was a perfect song for him to do. She says he looks just like his mom. Adam says it’s a shame the girls don’t like him then says he has the chops and can sing and that’s the most important thing.

He says it pisses him off that Zach has it all. Blake says the kid has some Elvis in him. Blake says his singing is spot on and that’s the most important thing. Team Pharrell’s Madi Davis is next and her mom is with her. She’s doing Love Is Blindness by U2. Pharrell talks to her mom about how she shares when she sings. Her mom says Pharrell has helped her daughter take the next step.

Pharrell comes up to hug her when she’s done. Adam says he didn’t know he had that in her and says he’s shocked. He says he loved it. Blake says her dad is crying and he loves that. He says that was the best of the night so far and a perfect match of artist and song. Gwen is crying full-on. Pharrell gets the crowd on their feet again then says it was amazing and says he’s so happy for her.

Team Gwen’s Braiden Sunshine is back and he brought his dad who he says is his best friend. Gwen asks about Braiden being in a band since he was nine. Braiden is doing Spandau Ballet’s True. That’s an amazing song. His dad says he likes seeing Gwen’s maternal instinct with his son. The performance is amazing and Gwen is on her feet and the crowd is screaming.

Blake says it’s magic and odd enough of a song choice and says the pairing of them has been one of his favorite The Voice things ever. Pharrell says congratulations then says when he hears him sound like that at 15, the big note in the middle he held forever was crazy. He says he likes his subtle runs and control. Gwen says he blows her away and says he showed how good he was and he’s so cute.

Team Adam’s Jordan Smith is next and he’s got his mom with him. He’s doing Jessie J’s Who You Are. (VIDEO HERE) Adam pulls him back a little bit since he’s doing so much vocally in the song. Jordan says this song means so much to him. Jordan slays as usual with big notes, big runs and he’s really belting. Jordan is crying when he’s done and the crowd is screaming plus Adam is on his feet.

Pharrell says his attention to detail when he sings is remarkable and amazing to watch. He says people feel his intention and that’s one of the most important things. Gwen says it’s hard to speak after that and says he’s so good and uses his gift to shine. Adam says Jordan has an insecurity about his performance but says he’s a great performer because his conviction keeps them mesmerized.

Team Blake’s Emily Ann is next and she says Blake is like a funny uncle. Emily Ann’s dad is there and she says he really influenced her song choice from when she as little. She’s doing Why Not Me by the Judds. (VIDEO HERE) They decide to bluegrass it up some more. It’s great. Pharrell says he doesn’t know country that well, but Emily Ann makes them classics for him.

He says her runs are clean and he says who is she and how does she sound like that. He says she sings well beyond her 17 years and says her voice is classic. Blake says she’s going to be around for a long time and he’s not even talking about the show. He says she did a bluegrass version of a Judds’ song on national TV and says – you’re welcome.

Team Gwen’s Jefferey Austin is next and he’s got his mom with him. He’s doing Robyn’s Dancing on My Own. Gwen says he could go make an album now and his mom says how happy she is that Gwen is working with her son. He sings and as usual, kills it. He does some amazing runs and throws out his falsetto. Wow. Gwen is on her feet crying and the crowd cheers.

Adam says he always looks forward to hearing him sing and says you can’t teach the unique quality that he has and says Gwen did a great job, but you can’t coach that and says it’s really special. Blake says he thought that Jeffery could win this and says Gwen could be the first female coach to win The Voice. He says it’s a big deal. Gwen says she’s blown away and doesn’t understand how talented he is.

That’s it – the voting opens now and join us at CDL for the live results show Tuesday night!