BY Stormy Elizabeth on May 18, 2015 | Comments: one comment
Related : Reality TV, Recap, Television, The Voice, TV 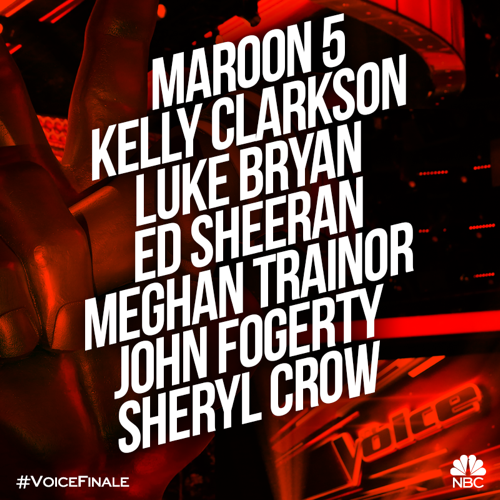 Tonight on NBC the Emmy award winning music competition The Voice returns with an all new Tuesday May 18, season 8 episode 25 called, “Live Finale, Part 1” and we have your weekly recap below. On tonight’s episode, the final four artists perform in Part 1 of the two-part Season 8 finale.

On the last episode of The Voice, the top five artists performed live in front of coaches Adam Levine, Blake Shelton, Christina Aguilera and Pharrell Williams for America’s votes. you watch the last episode? If you missed it, we have a full and detailed recap right here for you.

On tonight’s episode per the NBC synopsis “the remaining four artists perform live in front of coaches Adam Levine, Blake Shelton, Christina Aguilera and Pharrell Williams. One of the four artists will be a step closer to being named “The Voice.”

Tonight’s Live season 8 episode 25 is going to be exciting. We’ll be blogging it right here for you. In the meantime hit up the comments section and tell us how excited you are for season 8 of The Voice.

On the #VoiceFinale, only Team Christina will not be represented in the finals. We have
Team Pharrell – Sawyer Fredericks and Koryn Hawthorne
Team Adam – Joshua Davis
Team Blake – Meghan Linsey

Tonight, the finalists will perform original songs. The top 20 artists that have been voted out are also in the audience!

Singer: Koryn Hawthorne from Team Pharrell [VIDEO HERE]
Song: It’s a Man’s Man’s World by James Brown
Comments: Adam says all four of them will put the competition aside to say how proud they are of her. Blake says she did it and says that performance proves why she deserves to be in the finale. Christina says she’s so excited for her and says she has a special connection with her and hopes she had a great time singing. Coach Pharrell says she did it and asks everyone to stand up for her. They do. He says she was born for this.
Voting numbers: 855-VOICE-01 or text 1 to 8642

Singer: Meghan Linsey from Team Blake
Song: Change My Mind – original song by Meghan Linsey and friends
Comments: Christina asks Meghan about the song and she says she wrote it a couple of years ago. Christina says great job. Adam says he’s happy she did this and says it’s a cool thing to see. He says he’s proud of her and the show for promoting it. He says being an artist is about making your own music. He says he loved the song. Coach Blake says he can go on and on about her singing and says she sang the hell out of it.
Voting numbers: 855-VOICE-02 or text 2 to 8642
[2015-05-18, 8:41:34 PM] Rachel Rowan: Pharrell and Sawyer perform together – they sing Summer Breeze by Seals and Crofts. Then it’s time for another artist performance for the finale vote.

Singer: Joshua Davis from Team Adam
Song: The Workingman’s Hymn – original song by Joshua Davis
Comments: Blake says he knows he has a songwriter side to him and says he’s a great songwriter. He says that song is stuck in his head now. Adam says it’s an amazing step to be able to sing his own song. He says this isn’t just him writing a song but him writing a fantastic song and that makes him happy. He says to vote for Joshua because he’s the real deal.
Voting numbers: 855-VOICE-03 or text 3 to 8642

Singer: Sawyer Fredericks from Team Pharrell
Song: Please by Ray LaMontagne
Comments: Adam says that would be like Eddie Vedder handing him a song when he was 16. He says Sawyer won no matter what else happens. Coach Pharrell says it’s a dream come true and says a shout out to Ray for believing in Sawyer then says the band did a great job. Pharrell says Sawyer is living the dream.
Voting numbers: 855-VOICE-04 or text 4 to 8642

Pharrell and Koryn sing a funky version of the Beatles’ We Can Work It Out. Then it’s time for the next competition performance.

Singer: Joshua Davis from Team Adam  [VIDEO HERE]
Song: Hallelujah by Jeff Buckley
Comments: Christina says she’s excited to watch him grow throughout the competition. She says he’s so versatile and has a beautiful voice. She says it was heartwarming and it was right on. She says she was so engaged. Coach Adam says this is the time for him to really go. He says he’s really subtle but he wanted him to bubble over with passion and says he did it. He says he’s so happy that he accessed that and says he should be very proud.
Voting numbers: 855-VOICE-03 or text 3 to 8642

Meghan and Blake sing Freeway of Love by Aretha Franklin. She does most of the singing but he harmonizes and plays the guitar. It’s awesome. Adam and Joshua then sing Paul Simon’s Diamonds on the Soles of Her Shoes.

Singer: Koryn Hawthorne – Team Pharrell
Song: Bright Fire by Pharrell
Comments: Adam says it’s great that Pharrell wrote her a song and says he wants one too and says she delivered it joyfully. Christina says she loves Koryn and appreciates her talent. She says she delivers a great vocal and says she’s so happy that she has Pharrell as her coach to give her this moment. Pharrell says his heart is beating so fast because they did it. He says it’s like the lyrics said – he is our bright fire. He thanks her for singing it and says she’s special.
Voting numbers: 855-VOICE-01 or text 1 to 8642

Singer: Meghan Linsey – Team Blake
Song: When a Man Loves a Woman by Percy Sledge
Comments: Pharrell says she’s living the dream and says she started out in Steel Magnolia and didn’t go quite like she wanted but she’s rewritten her future singing what she wants to sing and sharing it with people. He says people love her. Adam says his favorite thing about her voice is that she has a gear box then an extra gear that’s like seventh gear. He says she has this extra thing. Coach Blake says her performance may change the course of events.
Voting numbers: 855-VOICE-02 or text 2 to 8642

Singer: Sawyer Fredericks – Team Pharrell
Song: Old Man by Neil Young
Comments: Adam says Sawyer is a good kid and says the purity of who he is and what he does should never be lost sight of. He says he’s the real deal. Christina says when she turned for him he shocked her when he picked Pharrell. She says Pharrell made great choices for him and calls Sawyer a gem she adores. Coach Pharrell says tomorrow everything will change thanks Sawyer for letting him live his dream with him.
Voting numbers: 855-VOICE-04 or text 4 to 8642