BY Annemarie LeBlanc on May 18, 2015 | Comments: one comment
Related : Reality TV, Television, The Voice, The Voice Videos 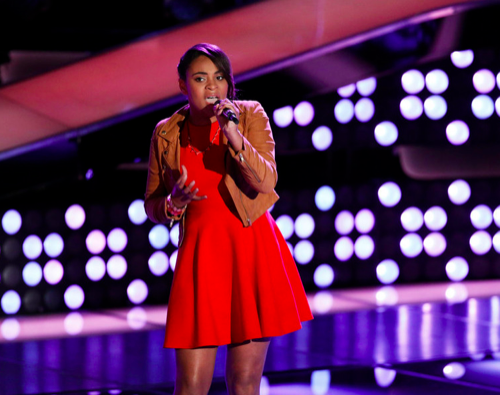 Koryn Hawthorne of Team Pharrell Williams sang, “It’s a Man’s World”  by James Brown this week for for her song choice.  On tonight’s show the top four artists performed live in front of coaches Adam Levine, Blake Shelton, Christina Aguilera and Pharrell Williams for America’s votes. Each of the Top 4 will have to give the performance of a lifetime to win the title of “The Voice.”

On tonight’s episode Sawyer sang “It’s a Man’s World” by James Brown and this is what the judges said about her rendition: Adam says all four of them will put the competition aside to say how proud they are of her. Blake says she did it and says that performance proves why she deserves to be in the finale. Christina says she’s so excited for her and says she has a special connection with her and hopes she had a great time singing. Coach Pharrell says she did it and asks everyone to stand up for her. They do. He says she was born for this. Voting numbers: 855-VOICE-01 or text 1 to 8642