The Walking Dead Season 6 Spoilers: The Wolves Attack – Five Questions to Be Answered 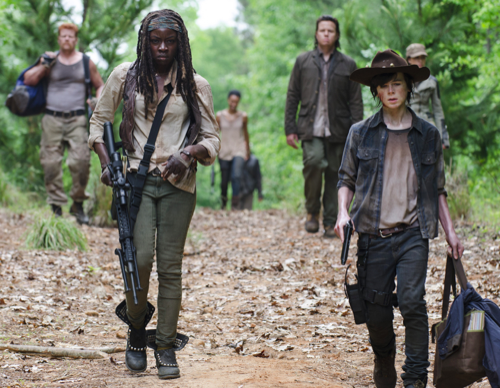 Will Rick Lead the Alexandrians? Clearly Rick showed himself to be “in charge” at the end of the finale, but Deanna is not going to release the reins easily. I expect that they will have some difficulties moving forward and that Rick will ultimately take over. That said, where will that leave Deanna? Perhaps dead? Perhaps in a different leadership role? We shall see.

How Will The Wolves Attack? The Wolves found Aaron’s backpack and pictures of Alexandria so the gig is up. They know all about the group and it is only a matter of time before they find them. Interestingly, however, they don’t particularly feel like they are all that dangerous. Morgan kicked their tails in short order all alone.

Will Rick and Jessie Get Together? This is sure to be a big question that is bandied about and those that want to see Michonne and Rick will not like the way it comes out I am guessing. I think they will become a couple and set the standard for the community where strength is concerned. Jessie has a powerful aura about her and she could make a very good ally.

Will The Execution of Pete Change the Community for the Worse? Pete being executed on the spot like that is bound to be a horrible moment for the rest of the Alexandrians. No trial…just a bullet to the head. How will this change the way they live and police one another? For some, it is bound to be too much having been sheltered through much of the apocalypse. This community adjustment is going to be a very interesting part of season six.

Can Morgan Fit In With His “All Lives Are Precious” Mantra? This is a very interesting aspect of the coming season as well. Here is Morgan, who was crazy as a bed bug earlier in the series, suddenly coming in all laid back and Zen. How will he fit in with Rick and the suddenly hardcore Alexandria? Will he fit in at all?

Season 6 of The Walking Dead is sure to be the most anticipated season yet. What other questions are you wondering about for the coming season? Come back to CDL for more The Walking Dead Season 6 spoilers and news!