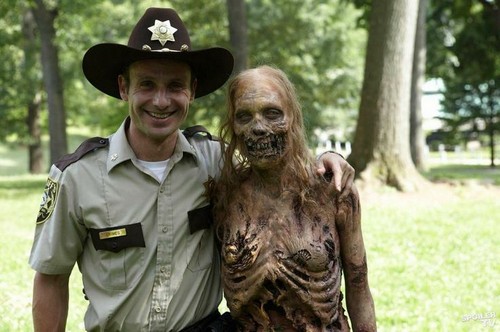 Scott Gimple’s letter read by Chris Hardwick on ‘The Talking Dead’ has been repeated several times, but a hint could have been buried in his words. While the general teaser sounds like a safe, PR crafted statement, I can’t help but focus on the word “loud” being used in the closing thought, “…things are going to get very big, loud and scary.”

My mind immediately conjures up the herd that invades Alexandria in the comics. In the show, the Wolves have finally made their debut, however they aren’t present in the graphic novels…or are they? An idea sprang into my mind (as well as others, undoubtedly) that it’s a possibility the Wolves represent or mirror the D.C. Scavengers from the books. The timing is about perfect and it would lean to another event…

Eventually, Rick, his group, and the Alexandrians come to war with the Scavengers – which is probably the current threat – the Wolves. As Rick and his gang are fighting, the sound of the gunfire and fighting draws a herd that enters the weakened Safe Zone. Perhaps all this was hidden in Scott’s hint and use of the term “loud” in his teaser. Plus, it would complement his promise that humans will no longer be the bigger threat.

If that is the direction of the show, you can bank on several nail-biting moments. During the melee in the comics, fan-favorite character, Morgan, is bitten and has arm cut off. Jessie and her son are attacked by some walkers and, as Rick, Carl, and Douglas (who is Deanna in the show version), come to help, Carl ends up being shot in the eye.

Don’t forget that the show doesn’t follow the comics to the letter. Many characters are killed off or kept on at vastly different times and ways than the books. How this will play into the script will be incredibly interesting. It’s a safe bet that this will be the bulk of the first part of The Walking Dead Season 6.

Norman Reedus hinted that when TWD returns in October, things in the Safe Zone are going to stay complicated. When we last saw Daryl, he and Aaron brought Morgan to Alexandria. The trio walked in to find Rick executing someone and that might give Dixon the wrong idea according to his admission to EW, “[In] that final moment too, Rick had said to us, if they can’t change their ways we’re just going to take this place. So I think that’s what’s going on in Daryl’s mind when he sees that happen. He’s like, “Alright, we’re taking the place.” And it kind of ends like that.”

How solid are all these leads and teasers from the actors and cast of The Walking Dead? Scripts haven’t been handed out yet, but they will be in the actor’s hands by late April. Filming for TWD typically begins within the first two weeks of May. Come back to CDL for more The Walking Dead spoilers, news and updates!