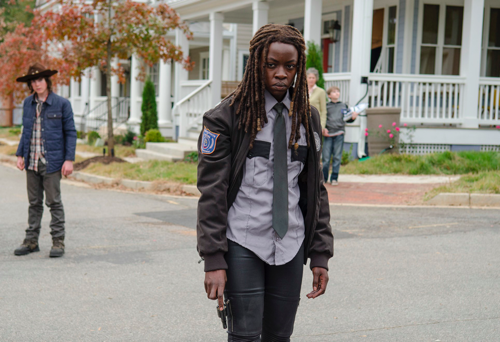 The Walking Dead spoilers for the season 5 finale episode discuss death, war, and departures from Alexandria. Like any season finale, season 5 of The Walking Dead has a ton of buzz. People are wondering what will be next. The end of every single season has been a cliffhanger and Season 5 will be no different. It really makes one wonder what will happen this time around. Questions are burning to be sure, but some more than others. Here are the five questions that keep me wondering the most:

Will Carol or Rick kill Pete?

Odds seem to be in favor of Rick after the fight they just had, but Carol is shown putting a knife to his throat in the previews. Carol is certainly crazy enough to do the deed given the chance so don’t overlook her as a possible murderer. Somebody seems destined to kill the jerk so why not Rick or Carol? We shall see.

Alexandria seemed like a perfect oasis for so long, it is amazing how quickly things are falling apart. It seems the moment that Deanna lost her son things were destined to fall apart quickly. That said, the town is not gone just yet. Perhaps they can somehow salvage the group and find happiness. I doubt it…that would be boring television.

Will Rick be kicked out of Alexandria?

Rick certainly put a big old target on his back after doing what he was asked not to do. The fact that what he did was honorable and correct seems to be lost on everyone. He is supposed to be the law, after all and he did try to let Pete leave. What will happen to Rick?

Will Michonne and Rick go toe to toe?

At the end of the big fight with Pete, Rick gets knocked out by Michonne to end the madness. Will Rick hold a grudge when he comes to, or will he take it that she did what she had to do? I think he will be pissed, but he will probably not show it. Rick is sneaky like that. There will be a time when that will come back to haunt Michonne I believe.

Will the group take over Alexandria after all?

All along it seems they are angling towards the group taking over. It makes sense to follow that storyline, but it certainly doesn’t make our group very likable. The Alexandrians are clearly sheltered and so on and are not nearly as zombie ready as our group. What if they are the ones exiled. That would be tantamount to murder really. It should be interesting to see which way the writers go with it. Come back to CDL for more The Walking Dead Season 5 spoilers!