‘The Walking Dead’ Spoilers: The Evolution of Rick Grimes Through Season 5 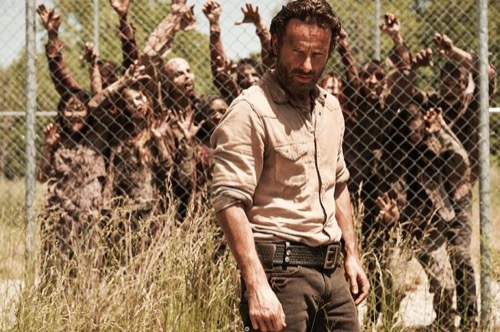 “The Walking Dead” season 5 spoilers discuss the evolution of the most important character, Rick Grimes [Andrew Lincoln], and how our hero continues to impact our favorite show. We first met Rick Grimes when he woke up in a hospital in season 1 of “The Walking Dead.” He had been shot during his duties as a cop and when he woke up, the world had gone to Hell around him. Over the course of 5 seasons, Rick has undergone a number of changes.

In season 1, Rick showed a lot of vulnerability. We saw him curl up and cry in his house when he discovered that his wife and son were gone. At the same time, though, we saw Rick take up the mantle of leadership with ease — although it was with some hesitation on his part. The Rick of season 5 would never have risked returning to Atlanta to find Merle, but season 1 Rick still had a large dose of humanity and compassion.

Season 2 of TWD we saw Rick taking on even more of a leadership role. Rick found a mentor in Hershel and for a time, there was a sweet peace living on Hershel’s farm. Rick showed that his humanity was still intact, although it was slipping, when he struggled with the decision to kill a young man who had been part of a raiding party. We watched as Rick fought with himself over whether or not to pull the trigger and we were horrified along with Rick when young Carl urged him to kill the man.

Rick’s leadership abilities stepped up even more at the end of the season when the farm was overtaken by walkers and the group fled.

Season 3 brought a harder-edged Rick who still clung to his ideals, somewhat. Rick became a much tougher guy in season 3 as he dealt with leading the group at the prison. We saw him crack a bit and lose some of his sanity after his wife’s death, and in season 3, Rick’s leadership came into question.

Season 4 brought a new side to Rick. He tried to put aside his leadership role and stay out of the fray of decision making and leading the group. The virus that hit the prison forced him to step back up to leadership and by the middle of the season, a new and deadly Rick emerged.

After the Governor destroyed the prison and killed Hershel, it seemed as though the little bit of compassion and humanity left in Rick died. No longer did we see him hesitate over the decision to “kill or be killed.” At the end of the season, as a matter of fact, we witnessed something snap within Rick when he was faced with The Claimers group threatening his son. Who can forget that brutal and bloody scene of Rick biting out a man’s throat? He was far removed from the crying Rick in season 1 and season 3.

Now, we see Rick Grimes as a hard-edged leader whose toughness cannot be questioned. That stoic resolve may be the thing that keeps his group of survivors safe during the rest of The Walking Dead Season 5. We can only watch and see what happens now. Tune in to CDL every day for more “The Walking Dead” spoilers!