The Young and the Restless (Y&R) Spoilers: Adam Escapes to Save Chelsea and Connor – Patty Warns Dylan About Dr. Anderson 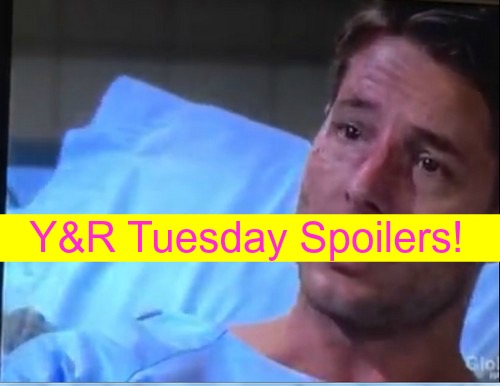 “The Young and the Restless” spoilers for Tuesday, November 3, tease that Patty (Stacy Haiduk) will once again try to warn Dylan (Steve Burton) about the threat Sharon (Sharon Case) is facing. Dr. Anderson (Elizabeth Bogush) keeps pumping Sharon full of drugs and she can barely carry on a conversation.

In addition, Sharon has been cut off from any friends and family members that could help her. Fortunately, Sharon’s new pal will attempt to save the day. It seems Patty will have to leave Fairview to truly accomplish anything.

Patty will call up Dylan and let him know that she’s in town. “The Young and the Restless” spoilers say Patty will insist she needs to see Dylan about something important. Of course, we know that Dr. Anderson has been making plenty of stops around Genoa City.

Will Patty be able to warn Dylan without interference? It’s tough to say, but it’s admirable that Patty is willing to try. Crazy Patty appears to have a good heart these days.

Meanwhile, the fire will cause chaos at Top of the Tower. Chelsea (Melissa Claire Egan) will panic when she realizes Connor (Gunner and Ryder Gadbois) could be in danger. Tuesday’s preview video shows Jack (Peter Bergman) holding Chelsea back as she screams, “Let me go!” Victor (Eric Braeden) will do his best to calm the mass hysteria. Everyone will be filled with fear, but Victor will assure all the guests that help is on the way.

At the hospital, Adam (Justin Hartley) will get updates on the blaze at Newman Enterprises. Naturally, Adam will want to protect his family. “The Young and the Restless” spoilers indicate that Adam will beg Michael (Christian LeBlanc) to help him get out of there.

It’s not clear how Adam will do it, but he’ll end up trapped in the fiery building. Adam will try to save Chelsea and Connor, but he may put himself in harm’s way. Y&R rumors hint that there will be casualties at this event. Stick with the CBS soap to if your favorite characters will survive the peril.

So Y&R fans, what do you think about the news that Patty will contact Dylan again? Will Dylan believe Patty if she manages to tell him what’s going on? What about the fire at Top of the Tower? Will Adam’s rescue mission be successful? Let us know what you think in the comments below and don’t forget to check CDL often for the latest “Young and the Restless” spoilers, rumors, updates and news.