The Young and the Restless Spoilers: Burgess Jenkins OUT at Y&R – Billy Killed Off in Halloween Fire or Recast? 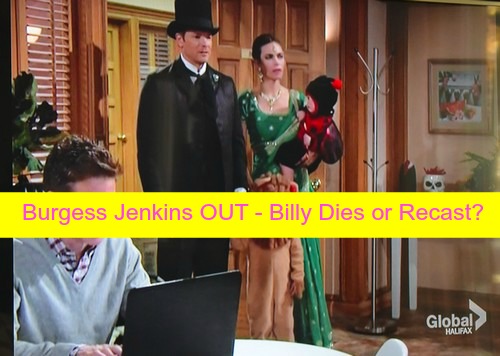 “The Young and the Restless” (Y&R) spoilers are in, and it looks like Burgess Jenkins could be on his way out as Billy Abbott. The handsome hunk has not been exactly embraced as Billy by many fans despite his excellent talent. The question is will Billy die as a consequence of the Halloween Gala fire or will he be recast if Burgess is leaving Y&R?

Fans have held out hope that Billy Miller would come back to “Y&R” to reprise his role but that is NEVER happening. Currently, Billy Miller is content with his contract with “General Hospital,” portraying Jason Morgan- and he wouldn’t consider returning to the CBS daytime drama unless Jill Farren Phelps wasn’t involved with the show – and even then, as the new top guy on GH why would he return to Y&R?

Burgess Jenkins stepped into the role of Billy Abbott in May off 2014, after David Tom couldn’t pull it off. The soap opera has struggled to keep fans interested in Billy since fan-favorite Billy Miller left the role. The fact is, TPTB need to pull off a miracle and recast the role with an established well-loved actor, or do fans a huge favor and kill off the iconic character.

For the past two months, it has been rumored that “a well-loved contract character will perish in the fire.” Chuck Pratt, Jr. revealed his plans in an interview giving away hints of a fire and explosion back in September. Immediately, fans were sure that Sean Carrigan [Stitch] could be on his way out, but is it possible that Burgess Jenkins could be the one leaving the show?

CBS Soaps in Depth stated that Burgess was not enjoying acting anymore. Burgess said that he would rather “work in the production team than acting any day of the week.” It all seems to point in the direction that Jenkins has decided to leave his role to pursue other opportunities.

When Burgess Jenkins took over the role last year, fans were calling for his firing because they felt he was the wrong fit for the role. It isn’t that he is a terrible actor; he is a good actor – he is just the wrong actor for the role of Billy Abbott in the opinion of many fans.

At first, fans felt that Jenkins was too old for the role; as they watched him more, they felt he was too stiff and not playful enough to pull it off. He seems to have good chemistry with co-star, Amelia Heinle [ Victoria Newman], but on-screen chemistry with other co-stars is not there.

According to the rumors, TPTB were less than impressed by his performance in the courtroom during Adam’s [Justin Hartley] trial. Specifically, they were unhappy with his performance when he recalled the night that Delia [Sophie Pollono] died. They felt that the scene could have had a much bigger impact if the RIGHT actor was in the role. It prompted them to reconsider his position in the show.

If Billy Abbott died or was seriously hurt in the Halloween fire, it would be a shocking twist. Is it possible that Billy Abbott will die in the fire? If Burgess Jenkins is out as Billy but Billy isn’t killed off, who would you like to see in the role?