The Young and the Restless (Y&R) Spoilers: Adam Burning, Trapped in Halloween Fire – Stitch and Ashley Face Death Together 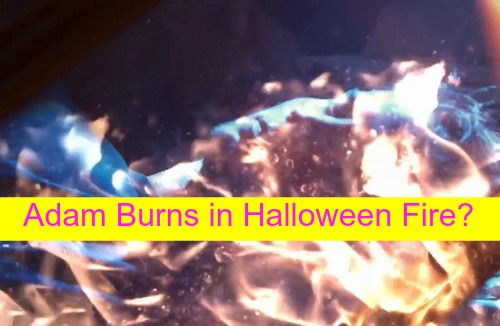 “The Young and the Restless” (Y&R) spoilers tease that Y&R fans will be treated to some jaw-dropping episodes soon. The latest promo is up and it doesn’t disappoint. Beginning October 30, a huge event will kick off on the CBS soap.

Someone mysterious has been sneaking around Newman Enterprises recently. He or she, who is in fact a terrorist, is apparently tampering with the electrical wiring and security system. It sounds like everything is going according to plan for this scheming baddie.

As the whole gang gathers for a little fall fun, the shindig will take a dangerous turn. The Halloween gala is about to go up in flames. In fact, “The Young and the Restless” spoilers indicate that some of your favorite characters could go out in a blaze of glory.

There’s been no official confirmation on any exits, which means we’ll probably have to just tune in and see what happens. Early rumors had been predicting that Stitch (Sean Carrigan) might die in the fire, and recent news does NOT dispute that idea. There are plenty of other guys and gals that might bite the dust of course.

The promo shows Adam (Justin Hartley) banging on a door and shouting for help in a smoky room. Meanwhile, someone dressed in an evil costume lurks in the hallway. It looks like Stitch will open a door and be thrown back by a fiery explosion.

At the Halloween Gala, chaos will erupt as people rush to safety. Unfortunately, several Genoa City residents will be trapped and scorched in the disaster. Stitch and Ashley (Eileen Davidson) will certainly face intense moments together.

As for Adam, he may have to confront trouble on his own. In the video, it appears an unconscious Adam will be dragged somewhere by the masked villain. Poor Adam will be left for dead, but is this really the end? It’s tough to say, but most viewers will be rooting for Adam to make it out of this alive.

Chelsea (Melissa Claire Egan) will likely be in panic mode as she waits for word on her husband. Stick with “The Young and the Restless” for updates on the fate of the partygoers.

So Y&R fans, what do you think about the news that lives could be lost at the Halloween gala? Who could be responsible for starting the fire? Can Adam cheat death once again? Let us know what you think in the comments below and don’t forget to check CDL often for the latest “Young and the Restless” spoilers, rumors, updates and news.