The Young and the Restless (Y&R) Spoilers: Adam Gets Delia Verdict – Noah and Marisa’s Sexy Encounter 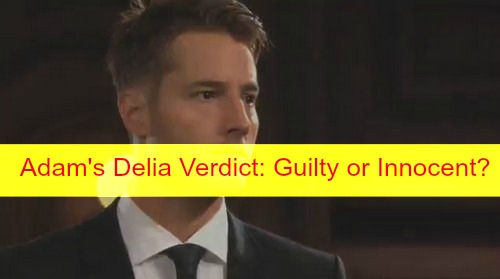 “The Young and the Restless” spoilers for October 19-23 tease that it’ll be a week of sizzling moments and shocking developments. The weekly promo hints that things will heat up for Noah (Robert Adamson) and Marisa (Sofia Pernas).

This couple is currently in the midst of a crisis thanks to oh-so-slick Luca (Miles Gaston Villanueva). “The Young and the Restless” viewers know that Luca is forcing Marisa to come live with him for a month in exchange for her daughter’s location.

However, even baby drama and a controlling ex won’t be enough to keep Noah and Marisa from indulging in a night of passion. Marisa will ask Noah to make love and there’s no way he’s turning her down. They’ll share some steamy kisses and head to a locker room for a sexy encounter.

Of course, their relationship will undoubtedly face more difficulties down the road. Victor (Eric Braeden) wants to get rid of Marisa for good and there’s no predicting how far he’ll go to make it happen.

Meanwhile, Cane (Daniel Goddard) will be confronted with plenty of accusations. Hilary’s (Mishael Morgan) ransom and a bad deal at Fenmore’s will both be traced to Cane, but he’ll maintain his innocence. Is everything a big misunderstanding or is Cane really to blame? Time will tell, but it appears Cane will be in a very tight spot. Paul (Doug Davidson) will end up arresting Cane for extortion when he refuses to cooperate.

Later this week, Adam’s (Justin Hartley) trial will begin and Chelsea (Melissa Claire Egan) will stand by her man. Adam will give Chelsea a bit of a scare when he shows up late for court, but he’ll manage to get there eventually. It looks like Adam isn’t going to run from this.

Whatever the verdict may be, Adam is going to accept it and live his life. Will that life be spent with Chelsea and Connor (Michael and Nolan Webb) or in jail with his fellow inmates? It’s tough to say, but Y&R rumors suggest that this courtroom bombshell is definitely something to tune in for. Stick with “The Young and the Restless” for updates on the verdict.

So Y&R fans, what do you think about the news that Noah and Marisa will heat things up in spite of their problems? Can they overcome the obstacles that lie ahead? Will Cane get out of the mess he’s in? Will Adam be found innocent or guilty? Let us know what you think in the comments below and don’t forget to check CDL often for the latest “Young and the Restless” spoilers, rumors, updates and news.

The heat is on, the jig is up, and the verdict is in on @youngandrestlesscbs!Don’t miss the drama this week only on @CBSDaytime! #YR #CBSdaytime