BY Heather Hughes on October 17, 2015 | Comments: one comment
Related : Soap Opera, Spoiler, Television, The Young and the Restless 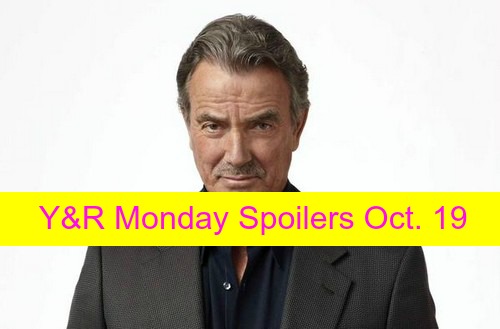 “The Young and the Restless” spoilers for Monday, October 19 promise an episode in which lovers and greed mix with deception to produce high Y&R drama! Fans can expect that Lily (Christel Khalil) will try to figure out what’s going on with Cane (Daniel Goddard). Lily will take the bag of money she found to Dylan (Steve Burton) and see if he thinks it’s tied to the ransom for Hilary (Mishael Morgan).

Dylan will hint that maybe there’s a more innocent explanation, but they should give Paul (Doug Davidson) updates on her findings. However, it’s a good idea to keep this quiet when it comes to Cane.

At the athletic club, Kevin (Greg Rikaart) will be annoyed with Michael (Christian LeBlanc) for helping Adam (Justin Hartley). After Michael leaves, Kevin will tell Lauren (Tracey E. Bregman) about his concern for Chloe (Elizabeth Hendrickson). Something just isn’t quite right. Suddenly, Lauren will get a call about a problem at work. It seems Cane has cost the company millions of dollars.

Dylan will show up at the police station to find Paul and Devon (Bryton James). They’ll be shocked by the news of Cane’s cash. Dylan and Paul will decide to confront Cane while Devon stays behind. Meanwhile, Lauren will track down Cane and give him an earful for what he cost Fenmore’s. Cane will insist that he hasn’t done anything wrong. Cane even took a pay cut and time off to help out. Lily will hear Cane’s explanation and want to know why he didn’t tell her.

Paul and Dylan will arrive, but Cane will say he doesn’t know anything about the money. When Cane refuses to cooperate, Paul will arrest him. At the police station, Cane will be charged with extortion. Elsewhere, Victor (Eric Braeden) will get annoyed with Adam’s lack of progress on shutting down the Paragon virus. Adam will admit that it’s gone rogue and he doesn’t know if he can do anything. They’ll spar and rehash their tumultuous relationship.

Victor will mention Connor (Michael and Nolan Webb) and imply that Adam cares about his family just like his old man. Victor will bring up the trial and state that Adam’s chances of being found innocent are slim. Adam will reply that he doesn’t need his father’s help, but Victor will insist that he could get Adam out of town quickly.

Michael will once again plead with Chelsea (Melissa Claire Egan) to testify at Adam’s trial. Chelsea still won’t want to, but Michael will make it clear that Adam desperately needs her. Adam will show up as Michael is leaving. Chelsea will tell Adam that she loves him, but she wishes he hadn’t come back to her. It’s all so complicated now. Chelsea will lament the fact that Adam could end up in prison. Adam will say, “Not tonight.” They’ll lean in close for a kiss and eventually make love.

Other “Young and the Restless” spoilers reveal that Noah (Robert Adamson) will struggle to accept what Luca (Miles Gaston Villanueva) is forcing Marisa (Sofia Pernas) to do. Noah will suggest that Luca is probably lying about knowing where Marisa’s daughter is. Luca will appear and announce that he’s telling the truth. Noah will lash out at him, but Luca will insist that Noah needs to get over Marisa. Luca will declare that he plans on making Marisa fall in love with him again.

Noah will head over to see Victor about getting Marisa out of this jam. After all, Victor would have the resources to find Marisa’s little girl. Victor will agree to help, but there’s one condition: Marisa’s gotta go. Victor will repeat that he doesn’t want Marisa anywhere near his grandson. Noah will insist that he loves her, but Victor will say Marisa is manipulating him. Noah won’t want to hear Victor’s accusations and he’ll storm out.

Later, Marisa will find Noah having a drink and she’ll try to talk to him. Noah will have harsh words for his love. Meanwhile, Victor will call Luca and order him to get Marisa out of town ASAP. It sounds like Victor is causing another mess. Y&R rumors hint that more trouble is on the way. Stick with the CBS soap to see if Victor will ever have a change of heart about Marisa.