The Young and the Restless Spoilers: Has Victor Newman’s Victimization of Women Gone Too Far – Can The Moustache be Redeemed?

BY Janette E Smith on August 13, 2015 | Comments: one comment
Related : Soap Opera, Spoiler, Television, The Young and the Restless 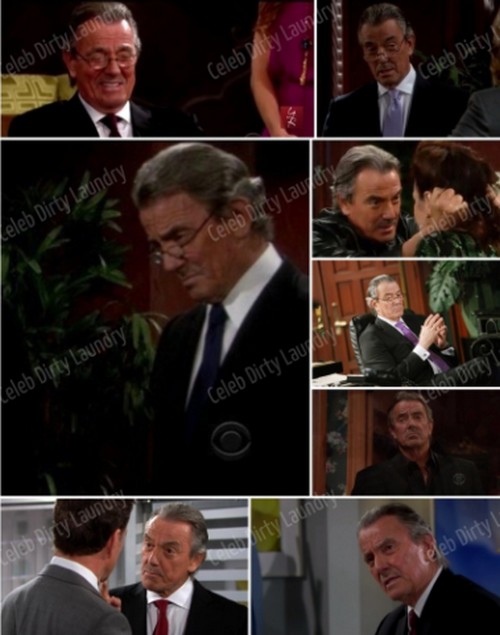 The Young and the Restless spoilers offer a view of Victor Newman’s devolution into a heartless sociopath during the Y&R Marco-Paragon storyline. What kind of monster has Victor Newman (Eric Braeden) become? Victor has always been ruthless and conniving but never really victimized women in the way he does now. The Victor Newman we love to hate always had a balance of good and evil. Victor does not go around innocent people he just mows them down – male or female – to get what his greedy heart desires. Victor has daughters, granddaughters, and a wife he claims to love yet he can stand by and watch as the women in his life are used and abused all in the name of “I’m doing it for my family.”

Phyllis (Gina Tognoni) and Kelly (Cady McClain) are his latest causalities. Is this the dastardly villain we love to hate? The Victor we fell in love with did protect his family from people who were out to hurt them. Did Kelly Andrews pose a threat to his family, did Phyllis, no they did not, they were just a means to an end. Victor just does not give a rat’s ass whether Nikki (Melody Thomas Scott) struggles with sobriety everyday in a life or death fight with the bottle – Victor only cares about Victor.

Victor is on a rampage to find the true culprit who is behind the Paragon Project. The thing that is so disgusting is that Kelly and Phyllis were clearly not behind this project yet they are victims of Victor -and why – “It’s all about the family.” A perfect example of mowing over anyone for the love of power and money because in the end that is what it’s really about for The Moustache.

Victor started scheming with the mentally ill Kelly Andrews right after he tried to gaslight his ex daughter in law Sharon (Sharon Case) by bringing in a twin looking exactly like her dead daughter Cassie (Camryn Grimes). By February 2015 Victor promised the unbalanced Kelly she would have Jack Abbott (Peter Bergman) all to herself but before he made this magical event happen Victor gave the evil druglord Marco a test run with Kelly. Kelly and fake Jack/Marco (Peter Bergman) were so hot and heavy in the storage room closet that fans believed that Kelly was under the spell of Jabot’s “HEX” love potion. Kelly acted so desperate for Jack’s touch she never even realized he was an imposter, a prisoner who had not had sex in years, and was just as hungry as she was.

Kelly would not be the only woman taken advantage of by Marco’s appetite for sex thanks to Victor. How would Victor react to this happening to his daughter or granddaughter – of course it would be off with their head… but it’s okay if he does it in the name of protecting the Newman family?

Victor has also put his own Granddaughter’s mother, Phyllis, in danger in more ways than one. How is turning a dangerous druglord loose on your granddaughter’s mother – violating her body practically everyday for the good of family? Victor is a greedy sociopath who cares for no one but himself. That old saying applies – if you say it enough you start believing it is true. Victor repeats over and over “I am doing it all for my family” – it is his daily mantra – but the truth is he is a greedy control freak who wants to control everyone’s life and he does not give a damn who he has to hurt to win.

Victor does not care if his wife Nikki (Melody Thomas Scott) continues to hit the bottle because of the horrible schemes he brings into their life. For example when Victor was taking over Jabot with Marco he forged the Jabot documents while fake Jack was in a coma and real Jack was hostage on a Caribbean Island with Psycho Kelly Andrews. Victor told Nikki to sign the documents but Nikki refused to sign the papers as a witness because she knew she did not witness Jack sign the documents – of course she was finally peer pressured into lying and signing them by her best boozing buddy Neil Winters (Kristoff St. John). Nikki struggles everyday to stay sober and the fact that once again Victor put her in a position of lying and loathing herself shows what a selfish jerk he is. How is that looking out for your family? Thanks to Victor we all had to sit through a whole hour dedicated to Nikki’s intervention – now that’s an hour we can’t get back!!

Now the writers have Victor teaming up with Jack and Phyllis – the two people left alive who have suffered the most by his actions in the Marco storyline. Phyllis wanted to kill Victor when she found out he was behind all of the Marco stuff – and she should have – but now she is teaming up with him asking him for an apology for causing her to have wild animal rape sex with the drug lord stranger. Seriously? Either Jack or Phyllis could shoot Victor Newman between the eyes and walk out of a courtroom totally free after what that monster has done to them. Yet here they are, the innocent victims working diligently at The Moustache’s side – the kidnapped and tortured with his raped wife… please Mr Pratt, give us a break!

CDL knows this is a Soap Opera and it is suppose to be “entertainment” but how is all of this entertaining? Victimizing women one after the other in the name of protecting Victor’s family? Of course this is Chuck Pratt Jr.’s stated MO and apparently he’s sticking to it! There was a time when Y&R wrote really entertaining storylines that did not include this constant preying on women. There were stories about Victor’s plane crashing and being stranded, the female villains were looney but entertaining, even baby switches were fun and there was a thing called romance in which great love stories developed from back in the day. We did not see lots of rape on Y&R yet now it seems week after week a female has been violated in one way or another – and Victor is the main culprit.

What have the writers done to the character of Victor Newman? Will they be able to redeem him? One thing is for sure, the victimization of women on The Young and the Restless needs to stop – the show needs to go back to its family oriented base for the sake of the fans. Viewers can get this kind of crap on prime time they don’t want to see it on Daytime!

What do you think viewers? Are you sick of the dumbing down and victimization of the female characters on Y&R? Word was that JFP hated strong women and orchestrated the show’s storylines accordingly but now we have Pratt, who seems to only be able to see women as unstable victims. In other words, Y&R’s portrayal of female characters has gone from bad to worse! Do you want to see more of a balanced vintage Victor Newman rather than this sociopath who is just as bad as the drug lord he brought in? Please leave your thoughts and comments in the CDL comments below.