BY Chrissie Williams on December 14, 2015 | Comments: one comment
Related : Soap Opera, Spoiler, Television, The Young and the Restless 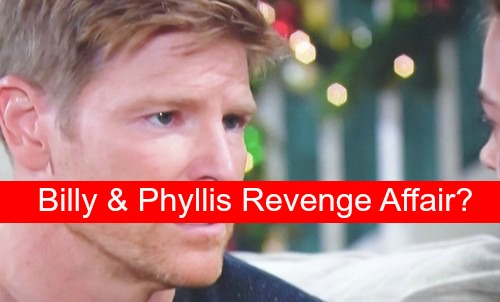 “The Young and the Restless” (Y&R) spoilers tease that Billy Abbott [Burgess Jenkins] is on a downward spiral, sinking deeper into despair as he plots against Victor with his sidekick Phyllis Abbott [Gina Tognoni]. The word on the Internet is that Billy is about to do something incredibly stupid—in fact; it looks like he may be about to bed his brother’s wife, Phyllis.

Over the past couple weeks, Billy has sunk deeper in his own world—a world that is not necessarily serving his best interests. Somewhere in his clouded judgement, Billy decided to re-launch the Paragon virus in an attempt to bankrupt Newman Enterprises. [Let’s just say, it wasn’t one of Billy’s brightest decisions.]

Billy and Phyllis are bonded by their hatred for Victor Newman [Eric Braeden] right now. Billy came to terms with Adam’s [Justin Hartley] role in his daughter, Delia’s [Sophie Pollono] accident. It has taken Billy two years to be able to embrace the idea that Delia’s death was not a cold-blooded murder, but a tragic accident.

Phyllis, on the other hand, is feeling the pain of Victor scheming with Marco Annicelli [Peter Bergman] and tricking her, and Jack’s loved ones into believing that Marco was Jack. For Phyllis, the anger she feels towards Victor is still very raw; she told Billy she would not be able to forgive him and MUST take action to bring Victor ‘to his knees.’

The joint coalition to bring Victor down, bonds Phyllis and Billy. After Jack reveals in the press conference all the details about Marco and how he acted as Jack Abbott under the direction of Victor, Phyllis could be driven straight into Billy’s arms. After all Phyllis will be humiliated by Jack for exposing her unwitting sexual relationship with Marco! Once Jack shames his wife will she react by cheating with Billy?

At Victoria’s [Amelia Heinle] house, she told Billy that she didn’t see how they could piece their marriage back together with his constant tearing her family apart. Billy tried to tell Victoria that he would try harder; however, Victoria knows his hatred for her father runs deep in Billy’s veins.

Phyllis meets with Billy to talk about Jack’s attempt to expose Victor Newman. Phyllis tells Billy that Jack humiliated her maybe even worse than Victor did when he had her bed, Marco, all those months. Billy tells her that Victor ruined his life as well—his relationship with Victoria is over, for good this time.

Phyllis is drawn to Billy, as they both are on the outs with Jack and fighting a battle against the Mustache—Billy leans in and kisses her. Will the kiss turn into a forbidden love affair? Will Billy and Phyllis’ hatred for Victor fuel a lust for each other? How will Jack feel when he learns his brother slept with his wife? Don’t forget to come back to CDL later for more “The Young and the Restless” spoilers, gossip, and news!