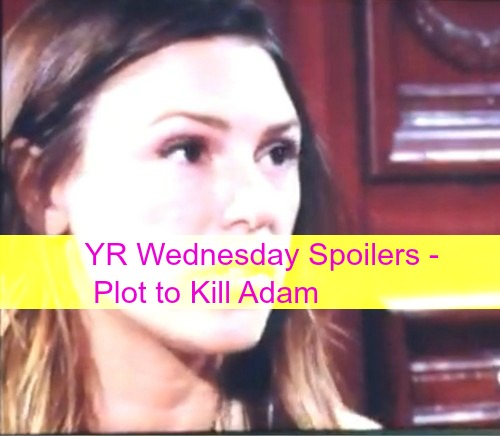 “The Young and the Restless” spoilers for Wednesday, October 14, reveal that Michael (Christian LeBlanc) will ask Chelsea (Melissa Claire Egan) to do Adam (Justin Hartley) a big favor. Chelsea has made it crystal clear that she’s through with Adam and his lies.

As far as Chelsea is concerned, Adam should be sent to prison to pay for his crimes. That way Connor (Michael and Nolan Webb) won’t have to deal with his father’s drama. However, Chelsea’s not fooling anyone. Deep down, Chelsea loves Adam and nearly everyone around her knows she’ll never be able to escape that love.

Adam has done some horrible things over the years and he doesn’t exactly have the best attitude 90 percent of the time. Nevertheless, the heart wants what the heart wants and Chelsea’s heart wants Adam. With that in mind, Michael will believe Chelsea would be the perfect person to defend Adam in court.

In Wednesday’s preview video, Michael tells Chelsea that Adam needs her to testify at his trial. There’ a good chance Chelsea will refuse for now, but Michael will keep working on her. Next week on “The Young and the Restless,” Michael will pressure Chelsea to admit she’s still in love with her husband. It sounds like Chelsea could end up caving in and fighting for Adam in court.

Meanwhile, Chloe (Elizabeth Hendrickson) will be consumed by rage over Adam’s actions. Though Y&R spoilers say she’s wrong, Chloe believes that Adam killed Delia (Sophie Pollono) in that hit-and-run accident. Now Chloe is back in Genoa City for justice. Chloe will approach Billy (Burgess Jenkins) and suggest that they should team up for revenge.

In fact, Chloe will believe they can figure out a way to kill Adam without getting caught. It seems Billy wants vengeance just as much as Chloe, but will he really go for it? Billy already tried getting justice on his own and it obviously didn’t work out very well. Perhaps Billy will let the Genoa City Police Department handle it this time around.

Elsewhere, Cane (Daniel Goddard) will raise Lily’s (Christel Khalil) suspicions. “The Young and the Restless” spoilers tease that Cane will insist Devon (Bryton James) isn’t going to find Hilary (Mishael Morgan) when he goes looking for her. Cane will imply that Hilary isn’t where Devon thinks she’ll be. Lily will be confused and ask Cane how he knows that. It’s safe to say viewers would like to know the same thing.

Cane has been acting awfully peculiar lately. Could Cane be in on the ransom note ruse or at least be aware of who’s behind it? It’s hard to believe Cane is becoming a ruthless villain here, but he might be protecting Devon somehow.

Maybe Cane simply fears Hilary is dead and he wants to spare Devon the dreadful news. Then again, it’s possible that Cane just needs quick cash or he’s covering for someone. Whatever the case, Cane’s got some explaining to do. Stick with the CBS soap for updates on what Cane’s hiding.

So Y&R fans, what do you think about Michael’s plea to Chelsea? Will Chelsea eventually agree to help Adam? Will Billy try to talk Chloe out of her revenge plans? What could Cane be up to? Let us know what you think in the comments below and don’t forget to check CDL often for the latest “Young and the Restless” spoilers, rumors, updates and news.