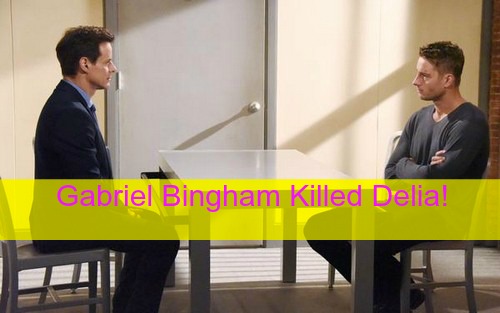 “The Young and the Restless” spoilers are in and it is looking like Adam Newman (Justin Hartley) may not have been the one to hit Delia (Sophie Pollono) after all. For two years, the writers have made fans and Genoa City residents believe that Adam was the driver who killed Delia on that terrible night.

The fact is, Adam believes he hit her – and until new evidence appears, he will take the fall. Genoa City residents have tried, convicted poor Adam before he stepped foot in court on Friday’s episode. Will Michael find out who really killed Delia before it’s too late?

On October 7, Adam was arrested for his hand in Delia’s death. Adam was wanted for questioning about his involvement in the hit and run leading to Delia’s tragic death. At the police station, the police officers were speaking to Paul and refer to Adam matching the description of the person ID’d as the one who could have hit Delia – BUT Adam looks identical to Gabriel Bingham, right! Clearly Gabe Bingam was the driver, NOT Adam Newman!

A key eyewitness placed Gabriel at the crime scene at the time of Delia’s death. Is it possible that Adam was innocent all along – and was given the man’s identity that killed Delia? Wouldn’t that be an ironic twist?

If it was proven that Gabriel Bingham was the person who hit Delia that would clear Adam of any wrongdoing. Adam didn’t take over Gabriel’s identity until after he was presumed dead. Adam is also charged with assuming another person’s identity with the intent to escape legal charges.

The fact is, Adam didn’t know about his new identity until months afterward; Sage (Kelly Sullivan) was behind the whole sham – yet no one wants to question her? Shouldn’t she have a seat saved for her right next to Adam in court?

Adam accepted The Moustache’s (Eric Braeden) and Michael’s (Christian LeBlanc) offer to help him with his legal issues. Victor has an ulterior motive (of course), but is it possible that he will nudge Michael to find the identity of the person who really killed Delia?

“Y&R” fans should expect Michael to uncover the truth behind her death – bringing one heck of a surprise for Billy (Burgess Jenkins) when he has to come to terms with Adam NOT being a cold-blooded murderer.

One question that has never been answered by the writers is why Gabriel Bingham and Sage Warner were at the memorial site on the night Gabriel and Adam swapped identities. Clearly, they were in the area – close enough to see the car go off the road and rescue Adam – but why? Is it possible that Gabriel was there because he felt guilty for taking Delia’s life – and was considering confessing his role in her untimely death?

Sage has kept a lid on the events that took place on the night Gabriel Bingham died. The only information she let slip out was he was a hero – saving the despicable Adam Newman. Clearly, there is much more to the story.

Will Sage voluntary retell the events surrounding Delia and Gabriel’s death? Is it possible she will be the person to save Adam from jail? Don’t forget to come back to CDL for more juicy “The Young and the Restless” spoilers, updates, and news!