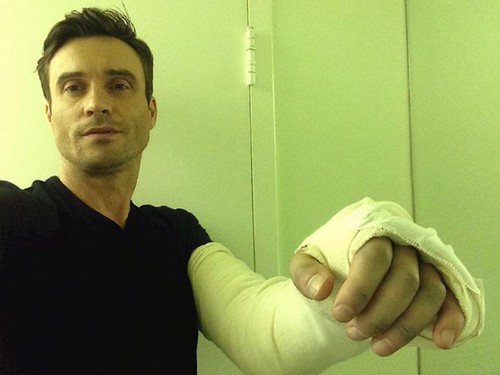 “The Young and the Restless” (Y&R) spoilers update on Daniel Goddard’s (Cane Ashby) broken elbow is that he will undergo surgery the morning of September 23. He posted on Facebook yesterday – September 22 – that it was still too swollen to operate at that time.

Goddard’s surgery will include putting screws – he didn’t say how many – and wire his elbow his back together. But, he was on the set of “The Young and the Restless” yesterday filming scenes that will be seen during the huge November sweeps storyline according to Daniel’s Facebook message and thank you to “Y&R” fans.

The actor also shared that the break was still bleeding – and included a photo of himself in a cast that reached from his shoulder all the way down his hand – noting the color of his fingers. Daniel injury occurred as a result of a fight scene while taping an upcoming episode of “The Young and the Restless.” The assumption is the fight was between Joe Clark (Scott Elrod) and Cane Ashby over Lily Ashby (Christel Khalil). Don’t mess around with Joe Clark!

In Daniel Goddard’s message on Facebook regarding the surgery he took time to thank his fans for their well wishes. “I wanted to thank you! You have been such a source of comfort, support and strength over the last few days and I truly and dearly appreciate ever single message wishing me well. You have no idea how much it means to me. I love you!

“The Young and the Restless” fans love him too and we hope for a speedy and full recovery for Daniel. There hasn’t been an update posted regarding the surgery yet, but when there is CDL will let you know as soon as possible how the operation to repair Daniel’s elbow went. We can’t believe with all the pain he must have been in that he was a champ and went to work on Tuesday to film scenes for the huge November sweeps reveals!

Offer your well wishes below and don’t forget to come back to CDL for all your spoilers, rumors, updates and news for “The Young and the Restless.”