The Young and the Restless Spoilers: Did Marco Shoot Jack – Is Victor Innocent? 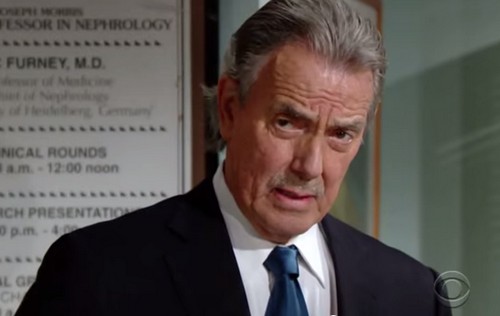 The Young and the Restless spoilers explore who Jack’s real shooter was and Y&R rumors say that The Moustache might be innocent! On the June 30 Young and Restless episode GCPD Chief Paul Williams [Doug Davidson] wants to get to the bottom of who pulled the trigger on Jack Abbott [Peter Bergman] but Paul is not the only one who is trying to get to the bottom of the shooting. Phyllis [Gina Tognoni] is on the warpath and that path leads to one person Victor Newman [Eric Braeden].

Victoria [Amelia Heinle] tells Phyllis that she and her dad were together when Jack was shot, but later Nikki [Melody Thomas Scott] tells Paul she knows Victor met with Jack in the park. The last thing we knew Marco [Peter Bergman] and Gabe [Justin Hartley] had concocted a plan, I should say Marco concocted a plan, and Gabe went along for the ride, to make it  look like Jack/Marco had been shot and killed by Victor. Marco baited Victor to go to the park and BAM just like that Victor draws a gun and Jack Abbott is down.

We all saw Victor point the gun right at Jack and he even pulled the trigger BUT did Victor hit Jack with the bullet or did somebody else? Why was Marco Anicelli late meeting up with Gabe? Could Marco have gotten there early and waited for The Moustache to make a move when real Jack showed up? Then Marco shot Jack from a convenient vantage point?

Gabe comes running out acting shocked: “What have you done Victor?” After Victor leaves, Marco comes sauntering out of the shadows not acting too surprised to see real Jack on the ground – was there no surprise because Marco was yet again 2 steps ahead? Marco then leaves the scene of the crime and wants to get the heck outta dodge!

Does it make sense to have Victor pull the trigger in cold blood writing him into an even tighter corner as a murderer or attempted murderer – or would the writers pin all wrong doings on a character like Marco who will not be a permanent fixture on the show? Victor has done alot of devious reprehensible things but still has not crossed the line to murderer.

What does it say for your character when a heartless murdering druglord actually likes you? In the June 30 episode episode Marco tells Marisa that he actually likes Victor and why not? Marco’s first instincts are to lie, cheat, steal, murder and anything else he is inspired to do to get what he wants. Sounds a lot like The Moustache.

Marco was not born yesterday and seems to always be a step ahead, did he somehow find out real Jack was still alive and decided to beat everyone to the punch making it a double whammy – Victor goes to prison for Jack’s murder plus Jack is dead, then he is home free. Of course he will need to get rid of Marisa and Gabe. On today’s episode he is on his way to ridding this world of Marisa – will Marco succeed? Will Marco go after Gabe next? Rememeber loose lips sink ships and Marco is not going to leave any loose lips running around. Sources say July will be the month we finally see an end to the two Jacks and Cabin Killer stories and as those wrap up Y&R will focus on seeing the Gabe/Adam story finally come to a head. What do you think CDLers, did Victor shoot Jack or did Marco set him up yet again? Will Gabe come out of this unscathed? Stay tuned to CBS’s Y&R to learn the answers!