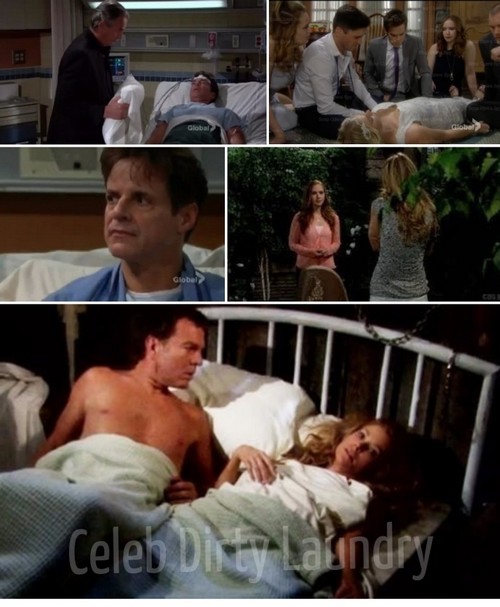 The Young and the Restless spoilers discuss Y&R problems and issues and how to resolve these. Does the Neilson Y&R ratings questionnaire out there mean that TPTB will be firing certain executives and changing stroylines in the near future? Does CBS’s Y&R need a life vest? There are 4 soaps left on the air and rumor has it Days of our Lives might have seen it’s last year. The big guys at Sony just stepped in doing the fans and the ailing soap GH a huge favor by firing Head writer Ron Carlivati for record breaking low ratings. Will CBS do the same for Y&R fans despite high ratings?

Just because the ratings are not at the bottom does not mean the soap is not in trouble. What you are about to read are storylines that Y&R writers use for Soap Opera fluff & filler – not real story but only fluff to make us think we are getting something, the problem is it is NOT working on the intelligent viewers and the natives are getting restless. The smoke and mirrors are failing as the same old tired storylines are refurbished one after the other.

The Young and the Restless Co-Executive Producer Jill Farren Phelps used filler with Jill Abbott [Jess Walton] and the “mysterious music box” Catherine [Jeanne Cooper] left her after her death. We stayed glued because we loved Catherine Chancellor and could not wait to see what the Duchess had done after death to her nemesis Jill. In the end, over a year later, all we got was con man Colin [Tristan Rogers] back in Jill’s life the music box was not worth anything – just a bad joke on all of the viewers. TPTB hoped we would forget that poorly written storyline.

One of the most ridiculous Y&R plot lines was the love potion HEX Ashley Abbott [Eileen Davidson] created for the Jabot cosmetics line. We were subjected to Ashley and Stitch [Sean Carrigan] in the shower having sex at the Jabot lab because the love potion HEX made them do it. The fallout of that indiscretion? Not so much of a raised eyebrow, what was the point? More sex filler thinking the viewers would forget about the lack of depth in the rest of the stories. 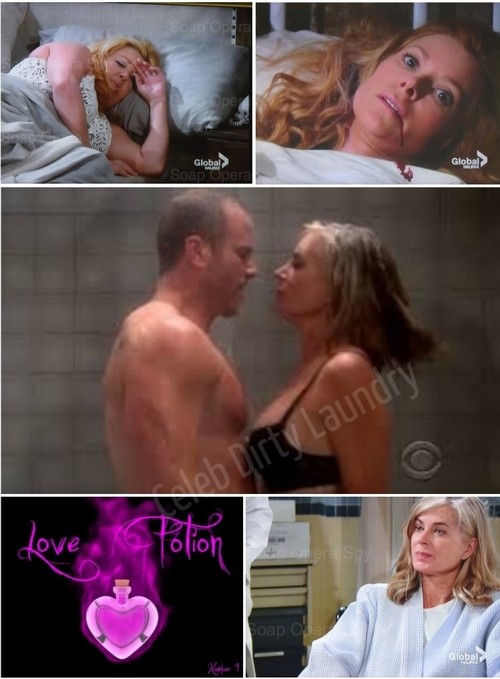 Another ridiculous story we all had to endure was the whole Sharon [Sharon Case] secret storyline that took up several weeks going into months – it was the deep dark secret that would ruin Nicholas’s [Joshua Morrow] life and give Sharon visitation with her daughter Faith[Aly Lind]. What could it be? It turned out to be the biggest dud of the year, no I take that back, ONE of many duds of the year. Nicholas and the tale of the girl who broke her neck because she accepted a dare from Nicholas to jump off the roof and into the Newman pool. Once again a pathetic attempt to give us shock value which landed flatter than a pancake!

Since Chuck Pratt Jr. took over the reigns in Nov 2014 we were promised this great multi catastrophe disaster that would rock Genoa City – people would die – but got a month of nothing. The viewers did get new sets to look at and watched sets of characters with filth on their face for a week but no deaths as promised by Pratt himself. Jack [Peter Bergman] and Victor [Eric Braeden] ended up in the hospital with yet again Victor getting caught fluffing Jack’s pillow in preparation for a smothering – as we watched the soap version of Grumpy old Men.

Hilary [Mishael Morgan] ended up in the hospital wounded by the wing of the plane landing on her leg. She then switched personalities ranting for days telling Neil [Kristoff St.John] and Devon [Bryton James] they were tricked she seduced them both because she was avenging her mother’s death splitting up their family. NEWSFLASH Writers NOBODY BOUGHT IT. Hilary healed up nicely on her own as we watched her look at Devon with puppy dog eyes for weeks and yet she was suppose to hate him.

Kelly Andrews [Cady McClain] went from a single sympathetic mother of a child who was killed by a drunk driver to a jealous vindictive monster who poisoned herself trying to set Phyllis [Gina Tognoni] up for attempted murder. She wacked Phyllis on the head with a full Champagne bottle, staged her own suicide by pills, leaving GC in the wake of “her death” waiting on St Barts in the Caribbean for her hostage Jack Abbott to arrive. All the while working with sinister Victor Newman. 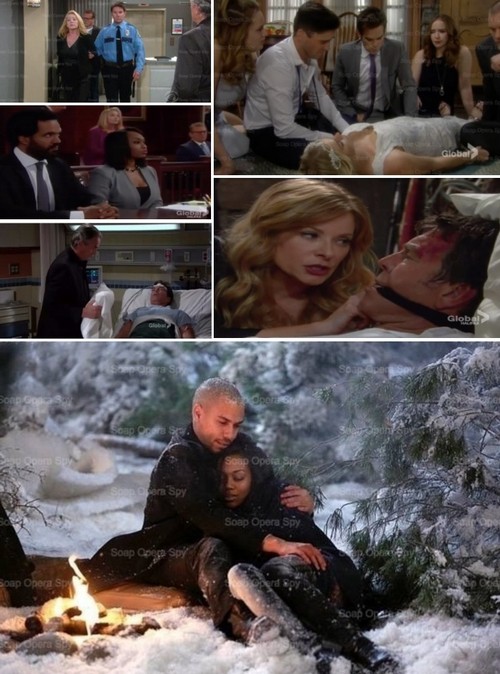 Victor promised psycho Kelly she could have Jack all to herself on the Island so in keeping his word Victor sent in an imposter criminal Marco Anicelli [Peter Bergman] to take Jack’s place on his wedding day in St Barts. The viewers have sat through endless hours of a ridiculous to the highest power storyline from Kelly in her daisy dukes & braids handcuffing Jack to the bed, starving him, and as we finally thought he was free Kelly then burst our bubble by hitting poor Jack in the head with a baseball bat taking away the viewers hope that this storyline had finally ended. We suffered more weeks of filler & fluff when finally to the relief of many viewers Kelly was found dead in Jack’s hostage bed in late May. Jack finally escaped to get home – but no it cannot be that easy since The Moustache is involved.

From Feb to the present the viewers have waited patiently for an end but still there is still no end to this storyline – it has evolved into more absurdity. Fans have joked that Victor must shop at “Doppelgangers R Us” in light of the”Cassie” [Camryn Grimes] doppelganger storyline. Victor tried gaslighting Sharon [Sharon Case] by sending a Cassie look-alike as the ghost of her dead daughter. The Cassie doppelganger ended up being long lost twin Mariah [Camryn Grimes]. In one year’s time the Y&R audience has been subject to a Jack/Marco Cassie/Mariah & Adam/Gabe Doppelganger storylines – is that good writing or lazy story telling?

Let’s continue down the road of the Y&R ludicrous and ridiculousness – as CDL has said we are still waiting for Jack/Marco to wrap up but during this 6 months the audience has also had to endure the worst story line of all time on Y&R: The Cabin Killer in which Pratt tried to make all of the young adult/teens in GC relevant by giving them a summer storyline. For instance Fen Baldwin [Max Ehrich] says he helped The Cabin Killer because the killer knew he had bad grades in College and was blackmailing him to spike the Scooby Kids punch bowl. Does that sound like something grown people want to watch through the summer? Safe to say this has been one “long cold summer”on Y&R.

For our added pleasure have a drunken Neil [Kristoff St.John] and Nikki [Melody Thomas Scott] arguing in the car about going to an AA meeting – of course newly pregnant Christine Williams [Laura Lee Bell] gets hit by the car and of course loses the baby. The writers bring in an assistant DA we have never seen before that Hilary has sex with to free Neil from vehicular manslaughter charges – also needing an excuse to bring in a familiar face, ex-fiance attorney Leslie Michaelson [Angell Conwell] whom the viewers had not seen in months – she was the one good thing that came out of this thrown together storyline. This was probably the fastest murder trial ever on Y&R – if they could only wrap up the doppelganger and Cabin Killer this quickly. Ex fiance Leslie and present wife Hilary get Neil free and he eventually stops drinking cold turkey and Devon [Bryton James] & Hilary get back together. Recall in Feb after the “big plane crash” Hilary “lied” pushing Devon away to keep his family together because they all hated her. BUT because she slept with another man to free dad Neil, Devon has forgiven her lies and the indiscretions? Seriously?

Michael Baldwin [Christian LeBlanc] has prostate cancer yet we never see him going to Dr. appointments or taking his medicine – all we see is Michael working on court cases and making offers to Cane [Daniel Goddard] to sleep with his wife Lauren [Tracy E. Bregman] so that the over-sexed Lauren gets her needs met from a younger stud – Michael not caring that Cane is married with children. We had to painfully watch 2 episodes of Michael talking to a hooker he hired and watch older and seasoned Lauren kissing Cane causing Cane’s self righteous wife Lily [Cristel Khalil], to overreact and end up in bed with Joe Clark [Scott Elrod].  The next Filler & Fluff was a week of Nikki in her Athletic Club room with a drunk she picked up from the bar who claimed she offered him lap dances – buddy Neil to the rescue again.

The writers are all over the place, especially when they dedicated a whole hour to Nikki Newman’s intervention where we saw angels named ‘Angel’ [Frank Runyon], clouds representing heaven, and all of the white robes that went with it – we also had to watch Nikki’s out of body experience and Victor mourn Nikki’s death [which was fabulous acting on Braeden’s part].

Nikki Newman has battled the bottle for years, fans were excited thinking that if a whole Y&R hour is dedicated to Nikki’s intervention this was going to stick – WRONG Nikki is off the wagon again AND that is another hour we the viewers cannot get back.

We have watched the nonsense of “who is in the confessional with Victor” to Michael’s Cancer being irresponsibly represented to a “love potion” that makes people irresistible. Another botched storyline was that suddenly Ashley is taking pills for her “pain” and finds out she needs emergency brain surgery – well yes that does happen in real life BUT how many people do you know do not need or get a portion of their head shaved for this serious delicate surgery and can drive themselves home the next day and go back to work as if nothing ever happened?

At the top of the worst storylines for this year is definitely the way they ushered out of Y&R the very talented Jessica Collins. For weeks we watched as her character Avery nursed ex husband Joe Clark back to health after falling off a balcony and becoming temporarily paralyzed. Y&R used this storyline to break up long lost lovers Avery & Dylan [Steve Burton], pushing Dylan into the arms of Sharon Newman in record breaking time. They demolished the character of Avery Clark in 2 months – making her seem crazy and irrational and leaving fans disappointed and disgruntled to lose yet another talented actor/actress.

CBS recently had a scroll on the bottom of the screen of a Y&R episode asking viewers to go to CBS.com and leave them feedback on the Neilson ratings questionnaire. Is this a sign that CBS is taking a page out of ABC’s book finally looking out for the loyal viewers & their beloved soap’s best interest – not being afraid to fire another bad Head Writer or Executive Producer? CDL hopes so, Y&R is a very important part of millions of viewers lives so let’s hope the network can keep this legacy strong for many years to come.

How do you feel about all of the filler & fluff CDL’ers? Which Y&R storyline do you want to see wrapped up ASAP? Please leave your thoughts and comments in the CDL comments below.