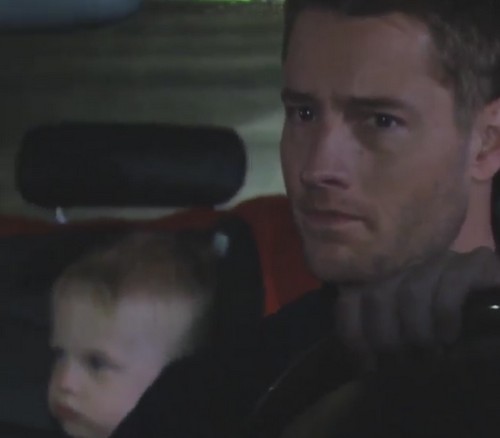 “The Young and the Restless” spoilers reveal that during the coming week, July 27 to July 31, one Genoa City resident is about to take desperate Y&R action. When Chelsea (Melissa Claire Egan) realizes that Adam (Justin Hartley) could be the father of Sage’s (Kelly Sullivan) baby, she’ll be furious at his betrayal. Adam will insist that it was one drunken mistake, but Chelsea won’t be interested in what he has to say. Chelsea will declare that Adam is out of her life as well as Connor’s (Michael and Nolan Webb). Adam will demand to see his son, but Chelsea will be done with all of his deception. As a result, Adam will make a bold move to make sure he doesn’t lose Connor again.

The latest “Young and the Restless” preview video ‘Desperate Acts’ (see below) shows Adam with a look of determination as “Peanut” sits blissfully in the backseat of his car. Naturally, Chelsea will be frantic as she tries to figure out where Adam took Connor. In fact, Chelsea will want to call 911. The decision to take Connor from Chelsea’s penthouse could prove quite costly if Adam isn’t careful. Chelsea could easily let everyone know that Gabriel Bingham is actually the infamous Adam Newman. Still, Y&R rumors hint that it’ll be a while until the truth about Gabe’s identity comes out. It sounds like Adam’s joyride with Connor will be brief and he can avoid trouble with the law for now.

Meanwhile, Hilary (Mishael Morgan) will get ready for the wedding of her dreams, but it could become her worst nightmare. While Hilary primps and preps, Devon’s (Bryton James) pre-wedding festivities will get a bit naughty. A bachelor party will get underway that leads to a dirty deed. It’s possible that things could get hot for a newly-single Cane (Daniel Goddard). Anything can happen when you throw some strippers in the mix. Of course, it’s also possible that Neil (Kristoff St. John) could be setting up a spiteful revenge scheme that will blow Hilary and Devon’s plans for a pleasant ceremony. Stick with “The Young and the Restless” for updates on the exciting nuptials.

So Y&R fans, what do you think about the news that Adam will try to take Connor away from Chelsea? What’s Adam’s game plan here? Will Chelsea turn Adam in to protect her child? What about Devon’s bachelor party? Who’s about get mischievous? Let us know what you think in the comments below and don’t forget to check CDL tomorrow for the latest “Young and the Restless” spoilers, rumors, updates and news.