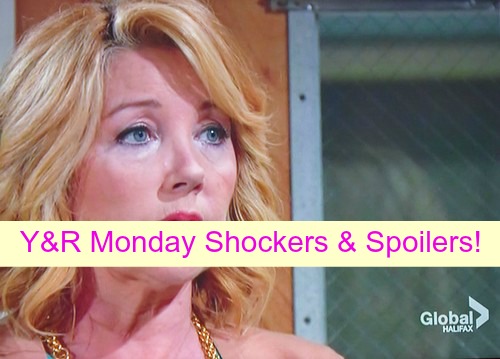 “The Young and the Restless” spoilers for Monday, November 16, tease that Chelsea (Melissa Claire Egan) will be nervous about what might happen with Adam’s (Justin Hartley) appeal. Judge Elise Moxley (Jensen Buchanan) is notoriously tough, but Adam won’t be worried about her.

Chelsea will realize that Adam made a deal with Victor (Eric Braeden) and he expects that his father will take care of it. Now that Adam is indebted to Victor, there could be big trouble.

Speaking of trouble, it looks like Stitch (Sean Carrigan) will cause quite a commotion at the hospital. Stitch will dream about Ashley (Eileen Davidson) and shout out her name in his sleep. Abby (Melissa Ordway) will wake him up and say he was having a nightmare about the fire.

Ashley will finish up a phone call about Stitch and Abby’s wedding. When Ashley heads in Stitch’s room, she’ll hear about his nightmare and admit that evening has been haunting her as well.

After Abby leaves, Stitch will tell Ashley how he’s feeling. Stitch will make it clear that he wants to be with Ashley, but she’ll urge him to be happy with Abby. If anything happened between Stitch and Ashley, it would only end in heartbreak for all of them.

Stitch won’t want Ashley to run away from what they share and he’ll suggest that he needs to come clean to Abby. Ashley will think that’s a horrible idea and she’ll snap that Stitch had better not screw this up.

Judge Moxley will stop by to see Adam in his hospital room. Moxley will hint that she doesn’t think there’s a reason for a change in Adam’s sentence. Adam won’t understand why the judge would visit him if he doesn’t have a chance. Judge Moxley will indicate that Victor knows something that could ruin her life and destroy her career. It appears Judge Moxley may have no choice but to help Adam if she hopes to help herself.

Jack (Peter Bergman) will be intrigued by whatever Victor is pulling and he’ll set up a meeting with Senator Moxley (Jack Armstrong). At the athletic club, Jack will discover that Victor and the senator are already engaged in conversation. Senator Moxley will insist that he doesn’t interfere with his wife’s cases. Victor will leave the table and the senator will tell Jack that he doesn’t think Victor has any dirt.

Other “Young and the Restless” spoilers say we’ll get updates on what Victor’s using to torment the judge. Victor will meet up with Nikki (Melody Thomas Scott) and announce what his sources say. Victor will tell Nikki that Judge Moxley had an affair.

Nikki will be stunned by the news, but the real shock will come later. When Nikki shows up in Adam’s hospital room, she’ll tell the judge that Victor mentioned the affair. Judge Moxley will ask if Nikki knows that it was with Victor. Bombshell! The Moustache is a sly one.

At Jabot, Billy (Burgess Jenkins) and Phyllis (Gina Tognoni) will discuss the constant drama involving Victor. Billy will admit he’d still like to bring Victor down, but that could ruin his relationship with Victoria (Amelia Heinle). Of course, Phyllis will push for payback. Phyllis will say they’re in this together and they’ll shake hands in agreement.

Meanwhile, Victoria will have a birthday party for Katie and everyone will gather at her house for the celebration. Chelsea will approach Victor and say she heard about his deal with Adam. At Victoria’s urging, Victor will finally accept the Abbotts’ offer of office space.

It seems there are plenty of shady plots going on in Genoa City. Y&R rumors hint that some will succeed while others will fail. Stick with the CBS soap to see who will gain the upper hand.