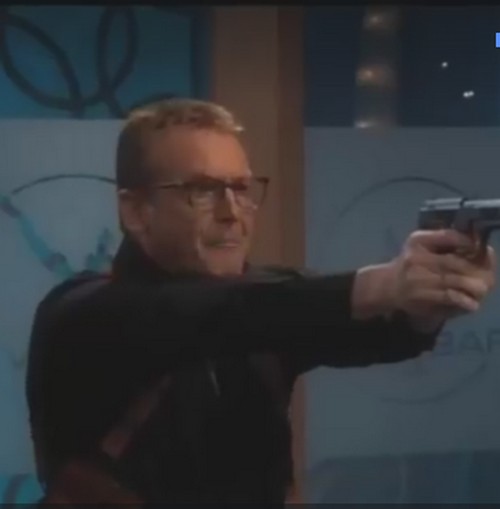 “The Young and the Restless” spoilers tease a new Y&R video showing that Cane (Daniel Goddard) and Lily (Christel Khalil) will take the first step toward reconciliation. Lily’s affair with Joe (Scott Elrod) can’t be undone, but she deeply regrets her actions. Cane originally thought there was no way he could ever move beyond the pain, but he’s starting to come around. The latest Y&R preview video shows Lily asking Cane if he’s ready to forgive her. Cane may not be completely prepared to let Lily off the hook, but he knows how much it would mean to his children. The rumors hint that Cane will suck it up and forgive Lily for the sake of their family.

Cane may be learning to let go, but the same can’t be said for Neil (Kristoff St. John). Neil put on a show at Devon (Bryton James) and Hilary’s (Mishael Morgan) wedding, but apparently he didn’t mean it when he wished them well on their special day. “The Young and the Restless” spoilers reveal that Neil will make plans to show Hilary the cell phone video of Devon and the hooker. Based on the preview clip, it appears that Neil will follow Devon and Hilary to their honeymoon destination. That’s some extreme dedication to vengeance! Neil is committed to getting payback, but will he truly be satisfied once he settles the score? It’s possible, but there’s also a good chance Neil will find revenge isn’t all that sweet.

Meanwhile, Paul (Doug Davidson) will continue to investigate Detective Harding (Chris McKenna). Harding may have taken a bullet, but evidently that wasn’t enough to draw suspicion away from him. It looks like the Genoa City Police Department will finally be on top of things for once. As Paul closes in on Harding’s connection to Marco (Peter Bergman) and the cabin killings, the situation will take a dangerous turn. Harding will soon be a murderer with nothing left to lose. Will Harding strike again when Paul backs him into a corner? Stay tuned to “The Young and the Restless” for updates on Harding’s next move.

So Y&R fans, what do you think about the news that Cane will consider forgiveness? Should Neil try to do the same? What about Harding’s confrontation with Paul? Will Harding do something else he’ll regret? Let us know what you think in the comments below and don’t forget to check CDL tomorrow for the latest “Young and the Restless” spoilers, rumors, updates and news.

So you want some drama? Take a look at what The Young & Restless is cooking up this week! and tap that LIKE button to show The Young and the Restless some love!