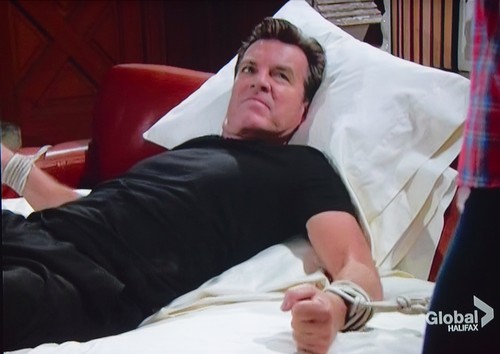 “The Young and the Restless” spoilers for Wednesday, August 19, reveal that Victor (Eric Braeden) will declare that Jack (Peter Bergman) can’t squeal on him. Victor will remind Jack about Kelly’s (Cady McClain) death as well as the demise of the men on the cargo ship. Jack will suggest that all of that it is Victor’s fault. Talk will turn to Jabot and Victor will say the Abbotts can have the company back in exchange for Jack’s silence. Jack will be irritated since Jabot was stolen from him and now Victor is using it as a bargaining chip.

At the cabin, Marisa (Sofia Pernas) will tell Marco (Peter Bergman) that they should leave Genoa City together. Marco will be stuck on the idea of being Jack again, but Marisa will insist that he has to give that up. They’ll bicker over Marisa driving them into the lake and her involvement with Noah (Robert Adamson). Marisa will reply that she was doing what she had to do, but she still wants Marco. Eventually, they’ll start kissing passionately. Marco will later wake up tied to a bed and Marisa will remark that Jack is the one who deserves to get payback.

Lily (Christel Khalil) will praise Neil (Kristoff St. John) for how he put aside his feelings of revenge at Hilary (Mishael Morgan) and Devon’s (Bryton James) wedding. Neil will say that he wants them to get the happiness they deserve. Neil will add that he’s going on a short trip. Meanwhile, Devon and Hilary will have a wonderful time on their honeymoon. They’ll make love and chat about their dreams for the future. When Devon gets motion sickness from a helicopter ride, he’ll urge Hilary to go on the hike they planned without him. Hilary will be shocked when Neil shows up on the trail. Y&R rumors hint that Neil still has big plans for vengeance. 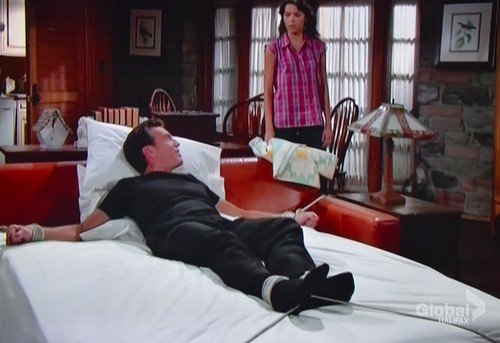 At the dive bar, Lily will ask Cane (Daniel Goddard) if he’s ready to forgive her. Cane will indicate that the kids were asking him about divorce. It seems Cane doesn’t want to put his children through any more of this. However, Lily won’t want Cane to forgive her just for the kids. Cane will admit that’s all he can do right now. They’ll go back and forth on the issue, but Cane will say he has to take everything one step at a time. As Lily and Cane kiss, their children will come around the corner. Lily will think Cane should spend the night at home and they’ll share a hug. This is certainly good news for the whole family.

Other “Young and the Restless” spoilers tease that Nikki (Melody Thomas Scott), Victoria (Amelia Heinle), Phyllis (Gina Tognoni) and Ashley (Eileen Davidson) will get updates on the end of Jack and Victor’s partnership. They’ll be stunned to learn that the merger is over. Victor will say he’ll explain it to his family and Jack can fill in his clan as well. After Victor leaves with Nikki and Victoria, Phyllis and Ashley will press Jack for answers. Jack will say that this move is in everyone’s best interest. The suspicions will linger, but Jack will soon have another matter to deal with. Marisa will give Jack a call and summon him to the cabin.

Jack will head out and Ashley will demand that Phyllis spill what she knows. There’s got to be more to Jack’s story. Phyllis will reply that everyone is in danger. At the cabin, Jack will offer his gratitude to Marisa and turn his attention to Marco. It looks like Jack finally has the upper hand. Just what does Jack have in store for Marco? Will Marco have a surprise rescuer, maybe Colin? Stay tuned to the CBS soap to see if Jack will get revenge.