‘The Young and the Restless’ Spoilers, Recap: Victor Furious to Learn Jack Dead – Abbotts Frame The Moustace for Embezzlement 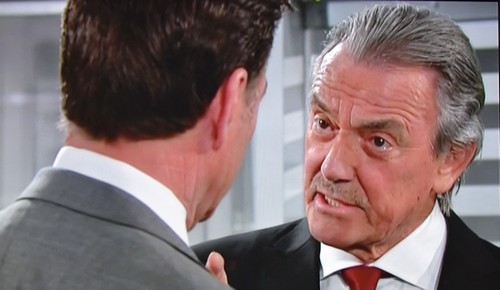 “The Young and the Restless” spoilers and recap for Friday, June 12, tease that Victor (Eric Braeden) will offer to let Sage (Kelly Sullivan) live in a fully-staffed house near the ranch. Sage will wonder what’s up, but Victor will say he wants to take care of her since she’s carrying his grandchild. Nick (Joshua Morrow) will arrive and get updates on Victor’s proposal. Sage will say that she has enough money to take care of herself. Nick will speak with Victor privately and ask if this is some sort of test for Sage. Victor will say that he’s just trying to make sure no one comes after their family. Later, Sage will get a doughnut at The Underground and Nick will say he wants her to move in.

Phyllis (Gina Tognoni) will mention she had an awful dream that Jack (Peter Bergman) was killed. Fake Jack will say that he’s fine, but Phyllis will still be concerned that it was some sort of premonition. Moments later, fake Jack will get a phone call informing him that the real Jack is dead. Meanwhile, Gabriel (Justin Hartley), who’s slept over at Chelsea’s (Melissa Claire Egan) place, will find out that he’s wanted at fake Jack’s top-secret meeting. Chelsea will be worried that Victoria (Amelia Heinle) has influenced fake Jack’s opinion of her ideas. Gabriel will imply that Chelsea is just reading too much into things and he’ll urge her to be sure of herself. Chelsea will comment on how well Gabe knows her and they’ll share a passionate kiss.

Kyle (Lachlan Buchanan) will question Billy (Burgess Jenkins) about fake Jack’s plan and Billy will turn on some music. They won’t want Victor to hear any inside details. Victoria will pop in and suspect they’re up to something. Later, Victoria will tell Victor about her suspicions and he’ll ask her to dig for information. According to Victor, Victoria is the only one who can help the family keep the upper hand.
Billy will show up at Chelsea’s apartment and say that fake Jack wants everyone to meet there. They’ll all exchange some snarky remarks before fake Jack arrives. Fake Jack will insist that Billy and Gabriel will need to put the past behind them if this plan is going to work. Gabe and Billy won’t be happy about it, but they’ll understand that they need to band together on this.

Fake Jack will give them the news that he bought a shipping company for $10 million and he’s setting up bogus account in Victor’s name. The idea is to transfer the money and make it appear that Victor is embezzling funds. Fake Jack will want Billy to use his bond with Victoria to his advantage. Billy and Kyle won’t be comfortable lying, but they’ll ultimately agree to help. Gabriel will privately tell fake Jack how much he wants to bring Victor down. When Gabe is alone with Chelsea, she’ll want to know what they were talking about. Gabriel will say it was about getting along with Billy and Chelsea will approve.

At the athletic club, Kyle will see Phyllis and Summer (Hunter King). Summer will worry that he’s keeping secrets from her, but Kyle will indicate that it’s just work stuff. Meanwhile, Billy will meet up with Victoria at the lab. They’ll agree on some summer camp decisions for the kids and comment on how they’re more in sync these days.

Other “Young and the Restless” spoilers reveal that Victor will blow a gasket when he learns the real Jack Abbott is dead. Fake Jack will say that it only cost him $10 million. Victor will be livid, but fake Jack will argue that he was one who put all of this in motion. Besides, there was no way Jack was going to survive on that island with a whack job like Kelly (Cady McClain). Victor will shout that he should have been the one in control of the situation. As Victor yells that Jack can’t be dead, Phyllis will come in and ask what’s going on. It looks like fake Jack aka Marco has really done it this time. Victor certainly isn’t pleased with his cohort’s actions. Y&R rumors say Jack is alive and will soon return to Genoa City for revenge. Stick with the CBS soap to see if Victor will get what’s coming to him.